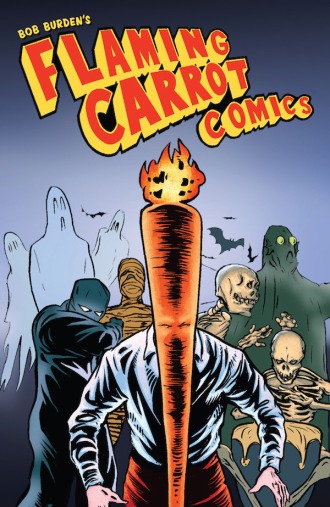 Bob Burden’s Flaming Carrot is coming back to print, from Dark Horse Comics as a large Omnibus volume. This critically-acclaimed yet absurd classic comics parody will arrive in mid-September. This Omnibus volume will be a 416-page paperback and collect Flaming Carrot #1-2, 4-11, 25-27 and retail for a mere $24.99.

The original news release from Dark Horse Comics says it best…Propagating dreamlike surrealism, disturbing violence, sexual adventurism, bar-hopping, and a bizarre and nightmarish costume, the world’s first postmodern super-man battled Road Hogs From Outer Space, went on drinking binges with Death, teamed up with the Teenage Mutant Ninja Turtles to save the “Umpire State Building”, bounced around on a nuclear powered pogo stick, and ordered some of that new Brussels sprout flavored ice cream that wasn’t even on the menu yet. Now, when the industry needs it the most: The world’s first surrealist superhero comic returns! The pied piper of fun! The poor man’s H-Bomb! The one-man Madis Gras! The further adventures of the strangest man alive! Fresh as cracked wheat! Doctor recommended. Maximum strength formula. New hope for a nation suffocating in the swill of its own mediocrity!