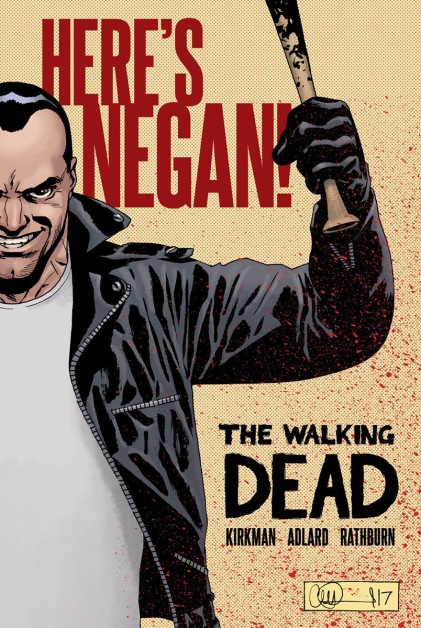 This fall will have something a little extra for the Walking Dead comics fans out there, with The Walking Dead: Here’s Negan, a hardcover story written by series creator Robert Kirkman and with art by Charlie Adlard.

Who is Negan? Since his debut in The Walking Dead #100, the charismatic psychopath has antagonized Rick Grimes, murdered his friend with a baseball bat wrapped in barbwire (which he calls “Lucille”), and led the Saviors into war against Alexandria and the neighboring communities.

The Walking Dead: Here’s Negan was originally a special backstory was first serialized in the monthly Image+ magazine. This October, the issues will collect together in a hardcover edition and available through Image Comics/Skybound Entertainment.

The Walking Dead: Here’s Negan will be available for $19.99 in comic book retailers on Wednesday, October 4th and in bookstores on Tuesday, October 10th.