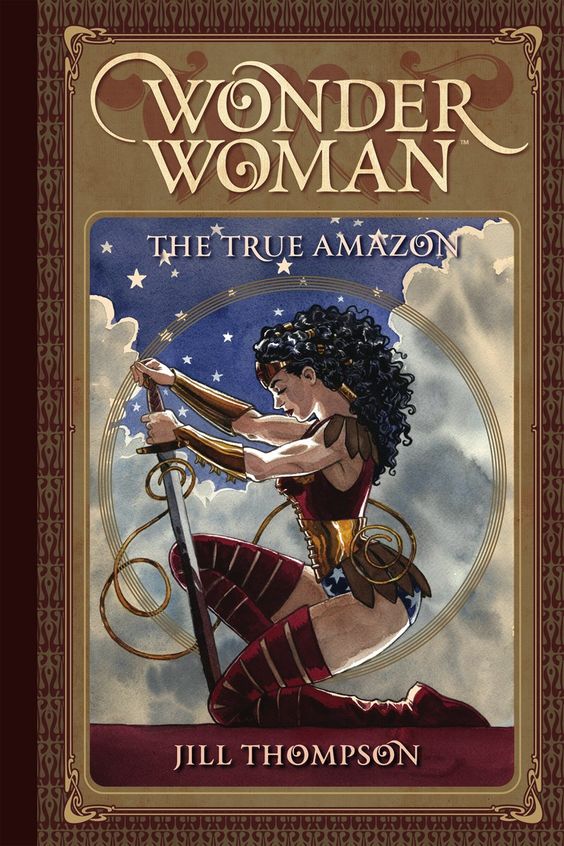 ” WONDER WOMAN: THE TRUE AMAZON is Jill Thompson’s original graphic novel re-imagining of the early years of the Amazon Princess Diana, who would grow up to become Wonder Woman. This fully painted graphic novel is unlike any Wonder Woman tale you have ever read, told as only Eisner Award- winning writer/artist Thompson could. When young Diana has the fawning attention of a nation, she grows spoiled. But a series of tragic events take their toll, and Diana must learn to grow up, take responsibility, and seize her destiny.

Steeped in the mythology of this iconic character’s original conception, WONDER WOMAN: THE TRUE AMAZON is designed to appeal to a wide range of readers. It’s a fresh, stand-alone interpretation of the most famous and iconic female superhero of all time and the fulfillment of a dream project by one of contemporary comics’ most acclaimed creators.”

A Look Over (spoilers):

Jill Thompson’s spin on the Wonder Woman origin was a pleasant, more in-depth take; surrounded by original imagery and unforgettable plot devices. Through out the 128-page graphic novel, the reader follows the journey of how Princess Diana of Themyscira became the heroine we know and love today.

Reading much like an ancient text describing the mythology of a culture, Thompson begins the tale from the very beginning, describing the Amazonians, their war efforts and arrival on the island of Themyscira. Found to be rather fitting regarding the subject matter, the execution of artistic and writing style combine beautifully to create a fitting epic in time for Wonder Woman’s current 75th Anniversary. 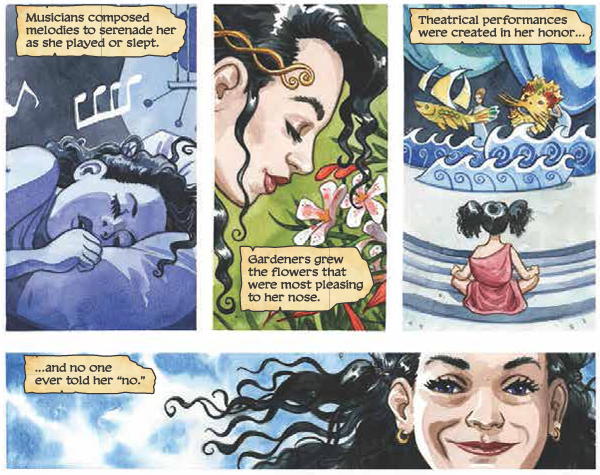 Throughout the in-depth description of the young heroine and her coming of age, I felt put off by some of the details of focus in her life. Much like all other children never being told ‘no’ through out their aging, Diana exhibits all negative traits that go along with it, creating a very conceited and boastful younger woman determined to torment those who cared for her. While it is a very realistic and human take on the heroine, adding such faults for the given amount of time that it was focused on gave a new feeling to her, one that was enjoyable at first.

As the story progresses, the author’s intention through this aspect is made clear, the negative traits regarding Diana becoming an obstacle when it comes to winning over the only Amazonian not automatically giving her the same unconditional love the others do. This quest for love becomes her main motive in life, all in attempt to win over her with the respect that goes along with it; ultimately driving her to become the Wonder Woman we know. 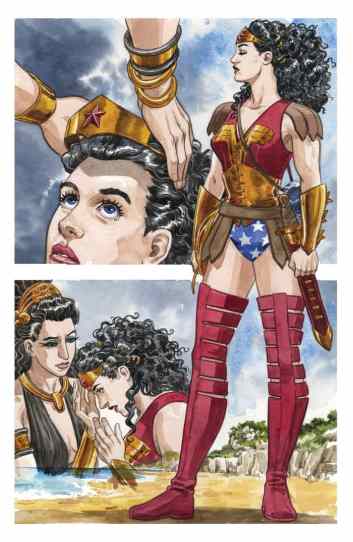 Despite the small criticism, I have little complaints regarding Thompson’s take on the origin story. Wonder Woman: The True Amazon is a refreshing, colourful look at a daunting and well-known character.

The art style is pleasing to the eye, the colours and overall drawing style were used in providing a well fitting universe surrounding the narrative. Such textures aided the fantasy of the land, giving depth and emotion to the setting alone. I feel that watercolour in comics is a highly underappreciated form. when used correctly, the imagery is stunning, the contrasts and motions holding their own when coupled with the natural textures and compositions of the medium. Since it is not used too commonly in comics, I welcome every instance of it; finding myself drawn to its beauty.

I easily recommend this novel, the beauty of it almost too much to describe. Upon flipping through the pages, I felt myself unable to let go, sucked into the origin in a way that I had not felt before. Thompson broke down Wonder Woman’s character in a way, easier to digest than the previously wide open gaps in her storyline while leaving mystery to her as a whole. The interaction between characters, the subtle drives and motives coupled with a powerful and life changing turn around provides the reader with a coming of age telling that is not easy to forget. Coupled with the beautiful artwork and stunning use of watercolour, Wonder Woman: The True Amazonian is unforgettable.

From the Page to Real Life:

In recent news, Wonder Woman has given the temporary title as honorary ambassador to the UN in a rather controversial move. In the 75 years of her creation, this heroine has stood for strength, power, liberty, and freedom; all idealistic traits for any leader. From the beginning, Wonder Woman stood for an archetype of females not too heavily seen in media, especially in comics and cinema where the Hero’s Journey trope is regularly used. Since her first appearance in All Star Comics #8 in 1941, Diana has exemplified a different type of woman, providing a sense of strength and ability.

Described in the 1943 issue of The American Scholar, Wonder Woman’s creator William Moulton Marston illustrates his intent through this choice…

“Not even girls want to be girls so long as our feminine archetype lacks force, strength, and power. Not wanting to be girls, they don’t want to be tender, submissive, peace-loving as good women are. Women’s strong qualities have become despised because of their weakness. The obvious remedy is to create a feminine character with all the strength of Superman plus all the allure of a good and beautiful woman.”

By placing Wonder Woman as temporary ambassador, the idealistic qualities that surround her are exemplified through the position, providing insight on the grounds of a capable, strategic, and powerful woman. This choice became rather controversial once members of the UN staff began to protest, requesting reconsideration on the grounds of the cultural insensitivity and sexual objectivity surrounding her. Instead, they suggested the placement of a real woman in that position, still holding all of the idealistic traits Wonder Woman stands for. Personally, I see no harm in the current choice as long as it is temporary. After 75 years, recognition of impact this heroine has had on the world is a nice way to end 2016 with the milestone of her creation.

As a young girl, I grew up with little to no connection to the universe of comics. Raised by two parents who despised fiction, fantasy, and any world that was not the one we lived in, my sights were very narrow regarding what I was allowed to take in. I had known of the superheros and epic tales through the childhood games of the peers that surrounded me, my interests always being there in a way that could no easily connect. Growing up and gaining my own independence, I have been allowed to find my own interests, doing now what my parents had never allowed me to do. Through this, I was able to explore forms of media such as cartoons, comics, and the genre of sci-fi as a whole. In a way, I am trying to take back my childhood and remake it in a way that was never allowed.