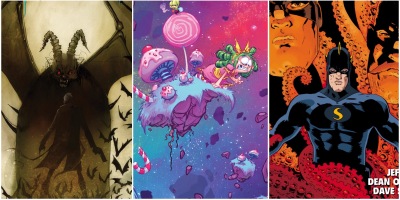 Another fine week in comics!

I think this often, even when I have yet to read the latest new comics. New thrills await, in many forms whether they be human, unhuman, or some other strange abstraction. No matter in preference, but the stranger the better when the story fits. This week, are the latest books personally checked out from the previous Wednesday. My reviews are below (with minor spoilers)…

“When she’s not working as a barmaid, Emerane becomes the Night, the most wanted thief in Umber. But when the Furie, Umber’s self-proclaimed champion, declares himself her enemy, she’s soon penniless and desperate. Her only recourse is to join the Bard and his ragtag team of rogues as they infiltrate the Cult of Uhlume’s tower in search of untold riches. The tower is not as it seems, however, and our heroes—if we dare call them such—may find more than they bargained for in its murky depths.”

This second issue packs a bigger punch. The cast is a bit more solid, with more on character development and action. The Magus, in particular, is my favorite of the badasses with some moments in style and reaction I admire. Each main character has a bit of complexity to them in how they handle situations, for better or worse. The overall setting well-defined by the art and atmosphere mixed with great colorings and classic paneling. It’s a bit too soon to really care for the characters, but there is a good start here, where things pick up more so in the end, leading to a curious third issue.

“Decades of Gert’s blunders brings Fairyland to its final days. The last of this world’s survivors have to find a way to right her many wrongs. So many. Too many. They’ll probably die. Just read it.”

I never thought I would say this, but this series is top on my list I look forward to picking up. The latest issue continues to develop in areas I had little expectation for. This time, there is the Fairyland itself, growing its own mythology into the future. There is a coming apocalypse and end to it all, settled on Gert’s choices in her adventures. There is a serious yet ridiculousness to it all, where things will be complex, based on something not so complex. For the present, will she turn left or right? Such the decision seems trivial until an expected visitor complicates the passage. The conclusion brings more excitement, wondering whatever will become of this bizarre twisted fantasy, created by Scottie Young; whose writing of Fairyland is becoming as unique as his art style.

“Ghouls in the graveyard! Giant Monsters downtown! The Allan family comes face to face with a whole new threat. This one comes from the past and it won’t stop until the Allan’s are dead.”

I am not at all familiar with the previous October Faction series, of which this stems from. I love the art with its gorgeous colors and spooky design work. I felt engaged enough in the writing and odd characters, to see this particular issue through. The style of Niles from his previous work (30 Days and Night, Mystery Society, Dark Days) is a cherished sort and fitting for this gloomy Halloween season. I think I shall not continue with this series until I pick up the previous series, probably in trade paperback volumes by now. If it is as good as this, than I shall return to this current run.

Lord of Gore (Devil’s Due) by DB Stanley, Daniel Leister

“Decades ago scandal propelled the Lord of Gore B-movie franchise to mainstream success. In 1989 the film’s costumed slasher actor murdered a young actress in ways worse than his on-screen character, creating a media frenzy. Now on the cusp of a modern reboot, a struggling screenwriter learns that the deranged star wasn’t the only guilty party that night, but before he can share the information, the film’s slasher seems to have stepped from the screen into real life to stop him.”

I like the approach, very different from what I expected in looking at the cover. Yes, there is some gore and bloodletting. But, I feel the cover and title is misleading. Yet, much of the issue is about a convention surrounding a made-up horror icon and a convention of fans and guests. There is a lot of very realistic drama surrounding the background and guests. There is a lot of realism in how the attraction of real life murder somewhat enhances the myth. The idea and overall execution is clever and original, leaving possibilities in how this may play out. Plus, I think the B-movie genre slasher is something long overlooked in comics, and this is some potential gold in a great story. As for the screenwriter at the center, I’m also hoping for some interesting commentary on some aspects of violence and horror entertainment in the following issues.

“In the forties, Abraham Slam faced such menaces as the psychedelic Florist and the eldritch Cthu-Lou without breaking a sweat. But keeping the heroes of Black Hammer Farm from each others throats when his girlfriend comes to dinner proves far more perilous! Meanwhile, the Black Hammer’s daughter uncovers new clues to the exiled heroes disappearance!”

Another great issue, where I like there is a bit more focus on a particular character and angle of the mystery. Here, there is some previous focus on Abraham Slam, with a cool back story and some kickass action. The issue then brings much drama to the overall present. A solid issue, with the overall story still being a bit too surreal leading me to wonder what’s really going on.

“STAR TREK’s 50th Anniversary Celebration continues with this all-new series following the adventures of Captain Kirk and the iconic crew! New worlds! New species! New ships! And a new danger unlike anything the Federation has encountered before! Boldly go into a new era of STAR TREK!”

A great new beginning for the select bunch of us out there who enjoyed Star Trek Beyond for that it was, a revision of the classic series and not so much a reboot. The new series follows after, with some develops fans may not expect of the familiar bridge crew characters. We see more than ever how each primary crew member has their own lives and goals to tend to. Something will bring them back together, and that’s where I felt a bit cold in the ending. There is an ending, which I suppose brings in pure fan service and curiosity as a classic villain species from the old Trek, returns. For me, I felt a sour taste in bringing back such characters. Yet, I hope there will be something different, evolved about them other than the usual slogans and plans for assimilating people…