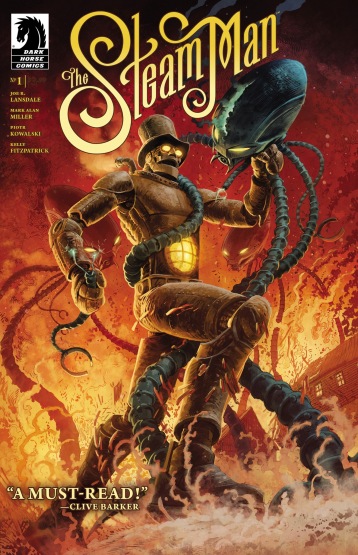 “The Old West, but not as we know it. Giant steam-powered robots are created to take down invading Martians and armies of killer albino apes in an all-out brawl. The Steam Man, a giant metal man operated by a team of monster hunters, seems to have the town protected and the West under control, until a crazed and powerful vampire comes to town to bring forth the apocalypse! Cowritten by Joe R. Lansdale (Cold in July) and beautifully illustrated by Piotr Kowalski (Sex). “

Steam Man is a new classic for the modern man, who enjoys a bit of fun and ridiculousness.

Not an original concept, is this idea of a giant mechanical automation powered by ordinary men. Such the idea is mastered in modern days through action dramatic form via our Power Rangers, Gundams, and mostly other fictional concepts of Japanese origins. But here, we have something of a bit more vintage throwback , and seemingly all-American (and not be confused with the Steampunk genre). The Steam Man walks his own way, and there is beauty in every step.

Here, we look into an alternate time period; a time back to the near end of Frontier Age, moving into an Industrial Age. Dangers arise as a new War of the Worlds develops. Strange otherworldly creatures in their own giant machines wreak havoc, and the Steam Man defends. We also have horror elements, with other evil elements coming in. In a world gone mad, it is inspiring for a giant defender guided by ordinary men to do their best, fueled by hope and courage. 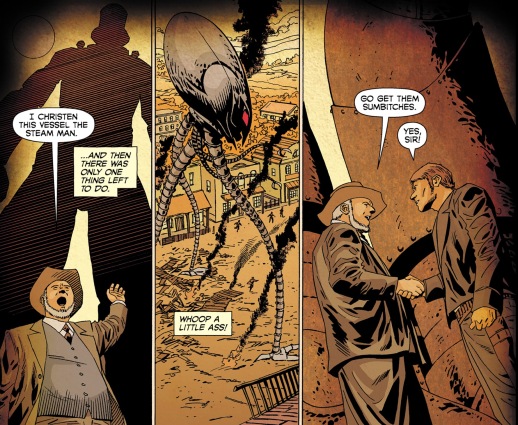 But for some strange reason, we have a rush of profanity feeling a bit out-of-place. Could such speech fit for the time?. For me, I feel such words are quite distracting. Still, I suppose it is the writer’s choice and I can excuse it all for the sake of campiness.

The aesthetics are pleasing, with the pencils and colors working together to tell this tale the way it was meant; with excitement and fury in the details and tone. Also included; lots of action, with sudden bloodletting and visual gore throughout. The colors are also outstanding with darker earth tones all around, with the right splashes of red and fire yellow when necessary. The shadings and use of unearthly lights adds an unsettling atmosphere, setting the perfect style for this tale to be told.

The world of the Steam Man is scary yet inviting to those courageous enough in their reading picks, to often try new things. The first issue walks with a strong start, with plenty of coal in its belly. That being said, I look forward to the rest of this limited series, with hopes that this great concept will continue long after. We shall see. But for now, I stand with The Steam Man.