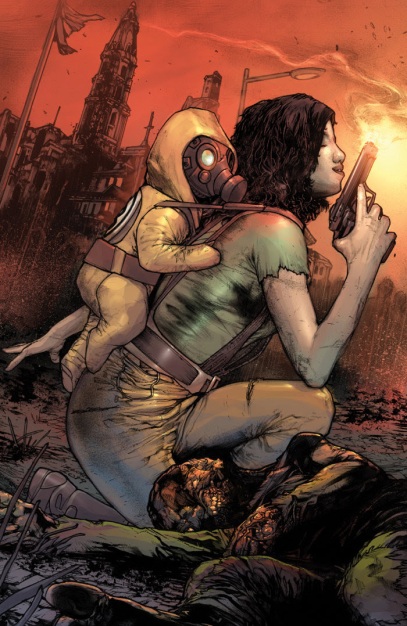 Maberry joins artist Alex Sanchez (Star Wars: The Old Republic) and colorist Jay Fotos (Locke & Key) in inviting readers to resist the “sickness that plagues the nation — and ultimately save the world!” As revealed in a press release, Jonathan Maberry projects the premise for this new series…

“Pandemica reflects a lot of fears about the direction in which our country and the world is going,” says Maberry. “It deals with a diverse group of people who discover that a secret organization is selling designer pathogens for use in ethnic cleansing. My story is about the kinds of people who take a stand against this, who find the courage to fight back, who put themselves in harm’s way to protect the innocent.”

The first issue of Pandemica, slated for release in September, will depict an America on the verge of war, as a shadow government prepares to launch “purity bombs” for ethnic cleansing, and a small group of scientists and former SpecOps shooters bands together to avert this disaster.

“I’m working with world-class scientists (epidemiologists, molecular biologists, etc.) to make the bioweapons in Pandemica as realistic as possible,” says Maberry. “What’s terrifying is that so much of this is actually possible; and that so many groups and governments over the last century have tried to make these kinds of genocidal weapons. Thankfully, we’ve also seen that there are people who will stand up against this kind of madness.”

“Jonathan Maberry’s Pandemica is the culmination of all the various and disparate ideas he’s been working through as a writing professional for the past decade,” says David Hedgecock, Associate Publisher at IDW. “After the immensely rewarding experience of working with Mr. Maberry on V-Wars, it’s an honor and privilege to help bring his fearsome new vision to an unsuspecting – and soon-to-be-captivated – reading audience.”

Pandemica will arrive in comic stores and on popular digital comics apps, starting this September.