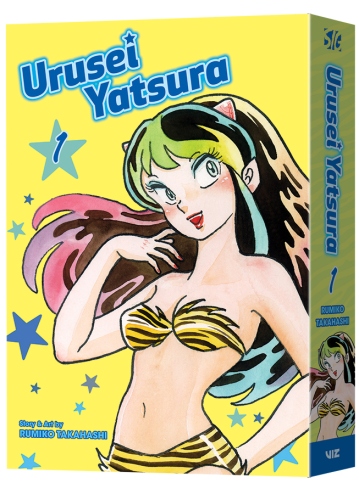 Urusei Yatsura was originally serialized in Weekly Shonen Sunday (1978-1987), about the hilarious misadventures of an unlucky human boy who meets a beautiful alien princess. The successful manga series was adapted into anime format and spawned a TV series and half a dozen theatrical-release movies. All were well-received and propelled creator Rumiko Takahashi towards more acclaimed manga hits including Maison Ikkoku (1980-1987), Ranma 1/2 (1987 to 1996), and Inuyasha (1996-2008).

The deluxe volumes will publish under the Viz Signature imprint. Each volume will have 400 pages of content, for English publication by VIZ Media on a quarterly basis. The series is rated ‘T+’ for Older Teens; Volume 1 will carry a print MSRP of $19.99 U.S. / $26.99 CAN.

“Urusei Yatsura is an iconic manga series, and until now, has never been fully published in English,” said Amy Yu, Editor in a recent press release. “Our new VIZ Signature editions allow readers to enjoy the complete URUSEI YATSURA for the first time ever. We hope new and veteran manga fans will add this legendary series to their collections!”

For more information on Urusei Yatsura and other Rumiko Takahashi anime and manga titles distributed and published by VIZ Media, please visit viz.com.