A teenage girl and her father travel to a remote alien moon, aiming to strike it rich. They’ve secured a contract to harvest a large deposit of the elusive gems hidden in the depths of the moon’s toxic forest. But there are others roving the wilderness and the job quickly devolves into a fight to survive. Forced to contend not only with the forest’s other ruthless inhabitants, but with her own father’s greed-addled judgment, the girl finds she must carve her own path to escape.

I recently saw Prospect at my local movie theatre through a very limited release. I dived in knowing nothing about it, other good feedback and some guy from Game of Thrones is in it. I was craving fresh science fiction not based on any franchise, game, book, or whatever.  I saw the poster, a little bit of the trailer, admired the environment suits, and that’s it (after convincing a dear friend of mine to come along).

After watching, this entire work felt very different for reasons I couldn’t initially put my finger on. It can’t be the story, for it’s not very original with a mix of elements of Enemy Mine, True Grit, The Road…all movies I like. But, there are new world-building elements that feel fresh or at least underutilized in other modern science fiction movies. A main new take is on a gold-rush style mining business for weird sponge things on other planets. The details are not spoon-fed for exposition, so the viewer needs to work out the groundwork along the way, which can be natural yet leaves room for a little mystery. Such is not a requirement to enjoy the film, because the center-story is what really matters.

That narrows down to the relationship a young teenage girl in relation to her father and his business partner, which leads to some deadly high-tension developments. I don’t want to spoil what happens. After all, this is a recommendation.  But the focus is on a survival predicament leading a dangerous quest, and more danger till the very end. Some of it might feel predictable, but the drama throughout is well-played, with heavy tension and development throughout.

The big surprise is how excellent the production, editing, and presentation feels. The technology and elements of the sci-fi feel old school reminiscent of the late 70s, early 80s; with much care to the handmade designs of the props, costumes, and equipment. There’s no holograms, touchscreens, CGI, or other modern gimmicks placed in. All are mostly homegrown practical design and effects. The detail on such is awesome, with much care and thought put forth by the director and production staff.

Also, the cinematography is well-done. Lots of shots and transitions taking care in the framing and positioning of people, actions, settings. Some practical effects are simple, working well to establish toxic landscapes, atmosphere spacecraft transitions, moments of weapon dueling that fits well for this gritty sci-fi tale. The setting (Olympia National Forest in the US state of Washington) is also well-utilized, feeling lush and almost otherworldly; untouched and quiet as barely habitable alien planets should be.

The sound is kept subtle but raised only at the most necessary tense moment. The breathing, stepping, creaking, all add to its tension. 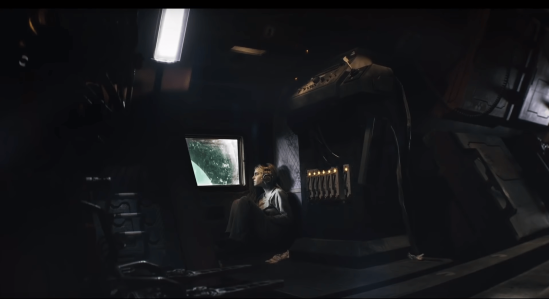 Overall, Prospect is a great movie that is both acclaimed yet underappreciated for 2018. If you have a chance to see it in theaters, go for it. If not, it will eventually be available for home release and in-demand/steaming sometime in 2019. Then see it!