BOOM! Studios recently announced Bury The Lede, a new original graphic novel from New York Times bestselling author Gaby Dunn (I Hate Everyone But You) and artist Claire Roe (Batgirl and The Birds of Prey).

The following is select info from a recent full news release from BOOM Studios, detailing more on Bury The Lede.

Bury The Lede is for comic stores next year, in October 2019. This new series if inspired by Dunn’s own experiences at The Boston Globe as a reporter, about how we find answers in an increasingly complex world and the hidden threats surrounding those truths.

Twenty-one-year-old Madison T. Jackson is already the star of the Emerson College student newspaper when she nabs a coveted night internship at Boston’s premiere newspaper, The Boston Lede. The job’s simple: do whatever the senior reporters tell you to do, from fetching coffee to getting a quote from a grieving parent. It’s grueling work, so when the murder of a prominent Boston businessman comes up on the police scanner, Madison races to the scene of the grisly crime. There, Madison meets the woman who will change her life forever: prominent socialite Dahlia Kennedy, who is covered in gore and being arrested for the murder of her family. The newspapers put everyone they can in front of her with no results until, with nothing to lose, Madison gets a chance – and unexpectedly barrels headfirst into danger she never anticipated. 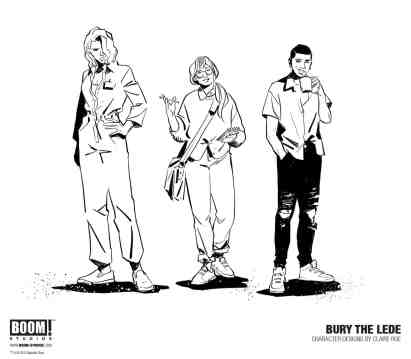 Dunn is a New York Times bestselling author, journalist, YouTuber, actress, and comedian. She and her comedy partner, Allison Raskin, created the successful YouTube channel Just Between Us along with the novel “I Hate Everyone But You,” published under Wednesday Books.

She has written for The New York Times, Cosmopolitan, New York Magazine, The Boston Globe, and Vulture, as well as a finance column for Marie Claire. Dunn served as a writer on ”Big Mouth” (Netflix) and in 2016, co-created and starred in a pilot for MTV, later developing original half-hour pilots for 20th Century Fox, YouTube Red, and FX, as well as joining the cast of “Take My Wife” (Starz) in the role of Brie. She is also the host and creator of the podcast, Bad With Money With Gaby Dunn, which has been featured as one of the “Best New Podcasts of 2016” by The New York Times and Vulture. 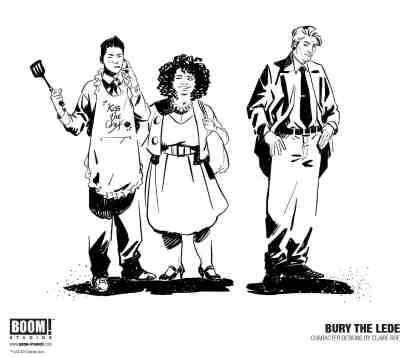 Claire Roe remains an acclaimed artist from the east of Scotland and studied animation at Duncan of Jordonstone College of Art, graduating in 2013. She has distinguished herself with dynamic work on some of the biggest properties in comics, including Wonder Woman and Batgirl and The Birds of Prey from DC Comics; Halo: Rise of Atriox from Dark Horse;The Wicked + The Divine from Image Comics; and Welcome Back from BOOM! Studios.

Bury The Lede will be available for sale in October 2019 at local comic book shops, bookstores or digital through the BOOM! official site and popular new comics apps.