Comics publisher Lion Forge recently announced Quillion, a new hybrid for comics storytelling and tabletop gaming. It plans to brings something a little different to both worlds, bridging a gateway for new readers between both.

The first series release under the Quillion flag will be Rolled & Told, set for “combining the thrill of tabletop role-play with the storytelling of comics in a monthly comic book format. Rolled & Told brings a ready-to-play, fun adventure for one of gaming’s favorite tabletop role-playing games, alongside beautiful illustrations, comics coinciding with each full adventure, as well as instructive articles.”

Issue #0 will premiere at San Diego Comic-Con in July as a free giveaway. Rolled & Told #1 will release in September. 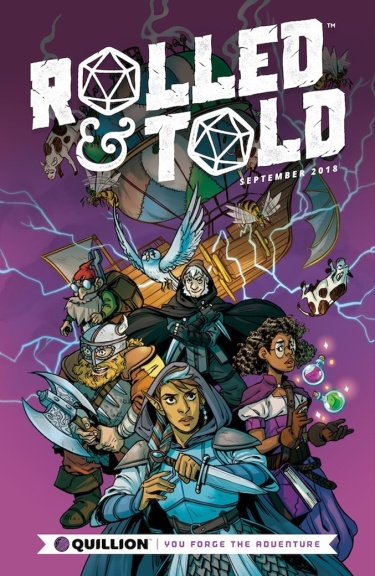 “A project like this creates an incredible opportunity for new creative talent to be showcased,” says Lion Forge associate editor, Christina “Steenz” Stewart. “With anywhere between seven and twenty different comics creators on each issue, Rolled & Told will be more than a periodical, but also a natural gateway between gaming and comics.”

“For me, Rolled & Told is the best thing I never knew I was missing until I saw it put together in all its magnificent glory. It feels both familiar and groundbreaking at the same time. You get fun, wild, and over-the-top adventures. Those adventures are jam-packed with not only awesome and stylish art, but also a comic driven directly by one of the adventures!” says Lion Forge lead game designer, E.L. Thomas. “For an old-school game master like myself, it’s a privilege to work with such talented people and an honor to be part of what is surely going to be a staple on many a game table for years to come.”

Rolled & Told No. 1 is set to roll out at better comic stores (and hopefully some gaming stores too) everywhere this September. For more information this and the Quillion imprint, also visit www.lionforge.com.