I love a good comic convention, especially in exploring its exhibit floor.

I recently attended the 2018 Emerald City Comic Con in Seattle. I had a good time, as I often do with big gatherings likes this, mostly attending panels and shopping this time.

Here are some pictures of my time on and around the Exhibit Floor, with notes:

The Image Comics booth, the place for ECCC for my current favorite publisher of comics. It’s pleasing to see Invincible finally getting as much space respect as The Walking Dead, both written and created by Robert Kirkman

Oni Press set up next door, had a nice bog booth an an ever-present smile to greet attendees. 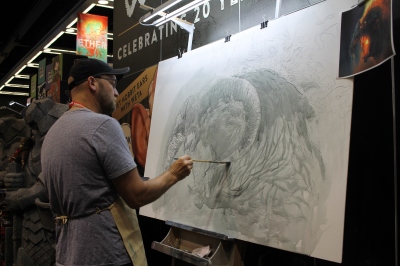 The Weta Workshop booth set up a little distance away. On Thursday, was the start of this wonderful art piece (didn’t get the name of the artist). It was finished on Sunday, as you can see much later in the pics.

Of course, there is some cosplay. I believe these two are from the hit indie game, Undertale.

Jelly Belly promoted its crazy assortment of candied beans in one are. Here,  was dinosaur mosaic of their sugary bits. 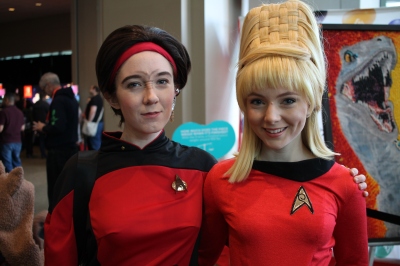 Ensign Ro and Janice Rand. Both very impressed that I knew their names. Such is a benefit to watching repeats of the classic series and Next Gen run.

Patches. I wish for a good jacket to put some of these patches on, especially the Star Wars ones. 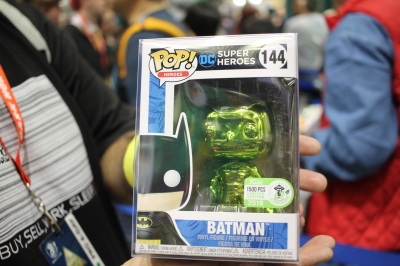 One fan, showing me the most sought after exclusive of the show, being the Emerald Chrome Batman Funko Pop figure. Price was original $15.00 to those who planned ahead (and got chosen via a lottery to stand in a special line). The eBay value is around $500. Not kidding.

Meanwhile at the Dodles booth where some guests may doodle art on small papers. Others are given hearts to place upon their favorites. I like this.

Artist at work ay one booth I forgot to get the name too. I like his scratchy etching style, but not sure what he was using there.

Work samples from that booth.

S2 Heart Designs here. One of the many booths showing off some great design style. While some were on the exhibit floor, there is much more on the upper floor in the Artist Alley. I will feature that area in a separate post soon.

Artist Erik Arreaga, showing some of his great work.

A stupid spinny wheel thing from a movie studio booth. I spun and landed on “Try Again, Next Time.” Seriously, what terrible person puts that on a prize wheel?

Back at the Weta Workshop booth on the early Sunday.

And here is some sweet classic Marvel comics I purchased. Added to some of the Funko Pops, discounted graphic novels, buttons, and cheap stuff gained from the Exhibit Floor. Overall, a fun time for myself and those who love random browsing and treasure hunting. I will share more on this great 2018 ECCC show, soon.