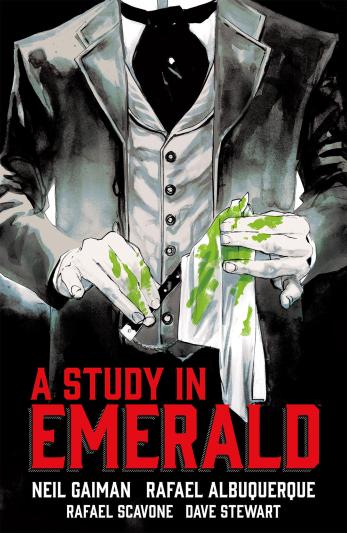 Dark Horse Comics recently announced its next installment adaptation in the Neil Gaiman Library with A Study in Emerald. Rafael Albuquerque, Rafael Scavone, and Dave Stewart to Adapt the award-winning writer’s short story, originally published in 2003.

A Study in Emerald is a supernatural mystery set in the world of Sherlock Holmes and H.P. Lovecraft’s Cthulhu Mythos. The heart-pounding tale features the brilliant detective and his faithful partner as they attempt to solve a horrific murder of cosmic proportions. The complex investigation takes the Baker Street investigators from the slums of Whitechapel all the way to the Queen’s Palace.

The cover art for A Study in Emerald is also by Rafael Albuquerque. The format is an 80-page hardcover, with a retail price of $17.99.

A Study in Emerald will arrive in stores on June 20, 2018. Visit DarkHorse.com for more information on the Neil Gaiman Library.