We have a sweet list of all the very limited exclusive items the IDW comics publishers are putting out for the 2017 San Diego Comic-Con International show.

These convention exclusives are only available for pick up at IDW’s SDCC booth #2743, or at the San Diego Comic Art Gallery from July 21st through July 24th. The gallery, located in the Liberty Station Arts District in the Point Loma area of San Diego, currently features exhibits by acclaimed artists Kevin Eastman (Teenage Mutant Ninja Turtles) and Walter Simonson (Thor, Ragnarök). For more information on the gallery and exhibit as well as directions, visit www.sdcomicartgallery.com.

See below for all the basic info (and available pics for most of its books) on the exclusives for the publisher’s comics, collected editions/hardcovers, collectibles, and giveaways.
Some of which are now available for pre-order at IDW’s web store, idw.pub/conexclusives. 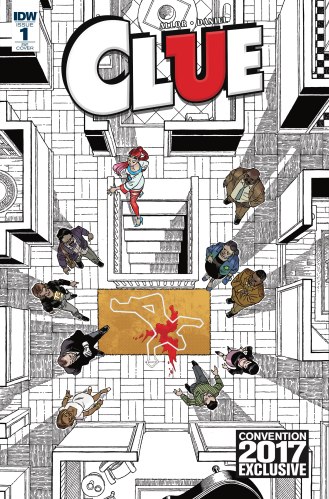 Follow the clues and solve the mystery in IDW’s new CLUE series! We’ve put together a special pack for this convention! We start with a RARE exclusive Gabriel Rodriguez Con variant cover, ONLY available in this pack, include all 3 regular editions with the alternate endings, and finish off with a full set of RARE Clue promotional trading cards, all tucked neatly into a Clue evidence envelope! All the familiar faces from the famous board game are back, with a couple new twists. 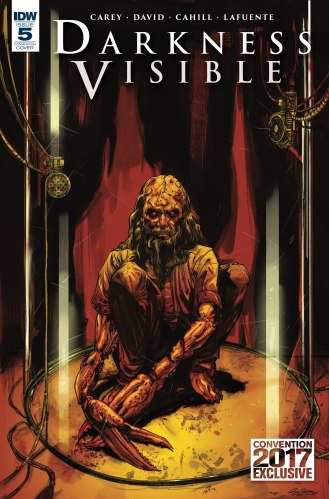 Written by Mike Carey and Arvind Ethan David, Darkness Visible tells the story of an uneasy co-existence between humans and demons that lasted eighty years, is now spawning an endless terrorist conflict, with a cover by Ryan Kelly.

Woo-oo! Bone creator Jeff Smith drew an amazing variant cover of the DuckTales cast for our convention variant!  Featuring beloved characters like Uncle Scrooge, Donald Duck, and Huey, Dewey and Louie, this new #0 issue is the perfect jumping on point for fans old and new in anticipation of the brand-new series coming Summer 2017!

Pick up all 5 of our Funko Universe one-shot comics from May, each with a cover modeled after the popular Funko boxes, and get a free BONUS copy of TMNT #70 with a Funko-style cover by artist Dave Alvarez! The only way to get this variant is to BUY this bundle pack!

This fall, My Little Pony: The Movie hits theaters, and this prequel mini-series is your first look at the fantastic adventure to come, with a fabulous new cover by artist Tony Fleecs! 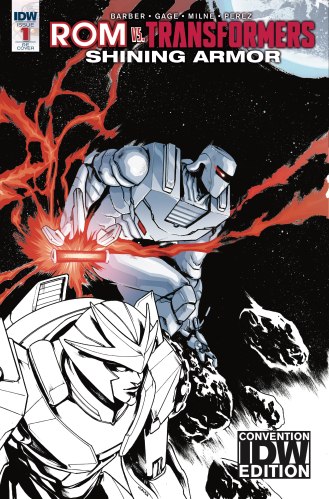 Alex Milne provides the variant cover to this crossover hundreds of years in the making! See the first interactions between ROM and the Transformers on Earth, and meet the universe’s only Cybertronian Solstar Knight! 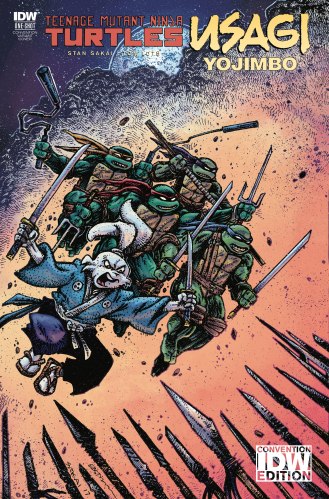 TMNT co-creator Kevin Eastman and Usagi Yojimbo creator Stan Sakai collaborated on this gorgeous convention variant! The TMNT are teleported to a world of talking animals—the world of Usagi Yojimbo! Get your copy signed at the booth!

This Wynonna Earp Season 1 yearbook, with a special convention photo variant cover, is filled with on-set photos, including action shots from the show and all-new behind-the-scenes goodies. This is a book all Earpers need in their motorcycle saddle bag!

Get the last 2 Wynonna Earp Convention Variant comics with a FREE bonus item!

TMNT co-creator Kevin Eastman provides a con-exclusive cover to this trade paperback! The animated worlds of the current Teenage Mutant Ninja Turtles Nickelodeon cartoon and Batman: The Animated Series collide in this outstanding mini-series featuring fan-favorite characters from both universes!

First release at SDCC! Cover by Berkeley Breathed
$40, 400 copies at the show

Get a special hardcover version of the latest collection of Berkeley Breathed’s recently revived Bloom County comic strip! This book, containing a bound in plate SIGNED by Breathed, features ALL-NEW strips from 2016 and 2017, that have NEVER appeared in print before (never ever!!). These newly-minted masterpieces present the continuing adventures of Opus, Bill the Cat, Steve Dallas, and the rest of the delightful denizens of Bloom County—and heaven knows how we survived all those years without you!

Jack Kirby was the undisputed King of Comics and IDW is proud to present the second Artist’s Edition focusing on his Fantastic Four work. And, even better, this collects his earlier, “twice up” art—it’s Kirby-sized!! This massive collection includes issues 33, 45, 47, and 60 of the Fantastic Four, plus a stellar gallery with 22 (!!) classic covers, and incredible pages, and three gigantic fold-outs–if you are a Kirby fan, this is the Artist’s Edition you’ve been waiting for!! Debuting at this year’s SDCC is the variant cover featuring Fantastic Four #72.

Continuing IDW’s yearlong celebration of the centennial of Jack “King” Kirby’s birth! Jack Kirby’s classic Fourth World epic told the story of a group of New Gods sent to Earth to oppose Darkseid. Featuring Beautiful Dreamer, Big Bear, Moonrider, and others, this was Kirby’s take on super-powered flower children! Included in this volume are issues, 1, 4, 5, 6, and 7, with nearly all pages scanned from the originals. Debuting at this year’s SDCC is the variant cover featuring a self-portrait of Jack Kirby, and this is limited to a scarce 100 copies.

This special deluxe release hardcover, with a new cover by series artist Gabriel Rodriguez, finally reprints the oft-requested and long-denied Eisner-winning one-shot, “Open the Moon!”, the other long-sold-out one-shot, “Grindhouse!” and the even more hard-to-find IDW 10th anniversary Locke & Key tale, “In the Can!”, along with additional covers, behind-the-scenes photos and more!

This convention edition hardcover, with a new cover by creator Walter Simonson, collects issues #7-12 of the Ragnarök series! After hundreds of years, a single god emerged into the post-Ragnarök world, Thor, the God of Thunder. But Angantyr, the Lord of the Dead, has discovered his reappearance, and unleashes his draugar, the undead walkers, against the Thunder God, seeking to destroy the last vestige of the former worlds, and the only hope for the present one. 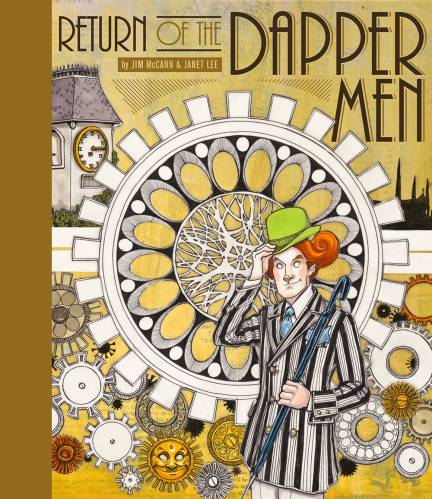 Some people are saying, I don’t know, you tell me, but a lot of people are saying this is the greatest book of the year. This guy, Shannon Wheeler, he draws these cartoons for the New Yorker, MAD, the Onion-he’s very, very, good, okay? Now he’s illustrated the most incredible tweets. Wow! You won’t believe what he does with these tweets. I mean, these tweets changed the world, folks. It’s true! It’s very true. EVERYONE is going to want this book – even the haters and losers (Sad!).

Things are getting weird in Surfside. Lately, Samantha’s best friend Jade explodes into fits of giggles whenever she sees a boy, and it’s throwing a wrench into the kick-back summer of surfing and hanging out that Sam had planned. But after swimming through a secret underwater cave, Sam starts to… see things. Like ghosts. And strange creatures. And maybe something even scarier! Can she and Jade get to the bottom of this mystery in time to save their town?

The fate of Earth and Asgard hang in the Balance as Thor, Beta Ray Bill, and tons of guest-stars do battle Surtur and his horde of invading demons! All with an exclusive Simonson cover just for the con variant featuring the very first drawing ever done of Beta Ray Bill!

The second Thor Artist’s Edition by the legendary comics’ creator Walter Simonson! Featuring seven complete issues of The Mighty Thor (#349 – 354, plus #380—the legendary all-splash page story!). As with all Artist’s Editions, each page of art scanned from the original art, in this case, from Simonson’s personal archives.

We are proud to offer an Official Disney Archive print of the DuckTales #0 SDCC Variant cover by Bone creator Jeff Smith. Each print measures 11.7 by 16.5 inches, is hand-numbered from 1 to 100, and is printed on 51 pound paper. Each print is packaged in a 13″x18″ envelope with a Official Disney Archive label on the front. Get it signed by Jeff Smith and DuckTales creators during the convention!

This String Divers F Defender Statue is a IDW x THREEA SDCC 2017 Exclusive, designed by Ashley Wood. Limited to only 50 units, this statue stands approximately 6” tall, and features 25 points of articulation. This statue also comes with 1 Quantum Defense Suit, 1 Quantum Propulsion Pack, 3 Weapons, and 1 Stand. You will also receive a free copy of the String Divers Trade Paperback with your purchase!

Some of the most exciting titles coming this fall with these giveaways available at the IDW booth throughout the show.

“Summer Insider” Preview book
Limited to 3000 copies
Look no further for some engaging summer reading from some of your favorite creators.

Sword of Ages Ashcan Preview book
Limited to 2000 copies
Writer/artist Gabriel Rodriguez (Locke & Key) welcomes you to a world unlike anything you’ve seen before in this sci-fi/fantasy epic.

Ducktales/Tangled Flip promo poster
Based on the Disney animated shows of the same names, show your enthusiasm by plastering this on your wall.

My Little Pony Movie Prequel poster
Before the movie opens in theaters, snag this poster before they’re gone in a Rainbow Dash!

There was an error retrieving images from Instagram. An attempt will be remade in a few minutes.