Fresh comic reading suggestions on the fly and on maybe on a budget..

Looking for something new without stretching your wallet?

I have just the things for that sequential art appetite, especially good for those who enjoy some variety in their browsing. Check out my chosen below, all fairly recent in 2016, though some suggests going back to 2015 for earlier issues. Each is available online through the Comixology digital comics reading service. Even better, each issue can be at your enjoyment for 99 cents; a price that wasn’t standard for comics of around 20 pages since the mid 1980s. 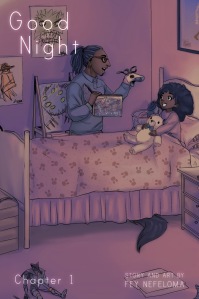 “Ayesha, a bright, young girl with a fear of monsters, questions her caring father the whereabouts of her absent mother.”

A very touching black and white comic series starter with curious fantasy and light horror elements. I love the idea that behind the monsters here, where lies an interesting story that’s starting to unfold. The setting feels very modern, yet has some fairy classic fairy tale style moments. The ending left me wanting more..

“In this corner, fighting for aid in his journey to Queensbury: Mammoth! In the other corner, the Gateway Champion, determined to keep Mammoth’s crew from heading west: Argos Dane! It’s champion vs former champion for the fate of the quest…but will Mammoth throw the bout in order to get everything he’s ever wanted since escaping Gaol? Ding, ding, kids. Grab a ringside seat for the fight of the…well, the fight of this issue, anyway.”

A fresh series I have recently jumped on to. Love the art style and fight sequences, a combination punch of shonen manga meets classic Saturday morning cartoon faire. The 3rd issue shows the pacing going well, and the characters further developed. It’s a must for anyone looking for some good adventure, a little historical fantasy, and a heavy dose of fun.

“A young boy finds his way amid the ashes of love and the myth of family.”

It’s a very dark series with serious matters dealing with domestic violence and psychological abuse. The first issue sets up a strong premise for what could lead to anything at the end, as there some curious hints of something far more unfamiliar afoot. The coloring is especially done well with the stylized art, for a story package that will keep my curiosity for whatever comes next.

GUARDIAN OF THE FOREST

“What is a guardian of the forest without a forest?” This question has plagued family man Ben Taylor’s life since he unwittingly unleashed a supernatural force upon his small town. Now, as the body count rises and the creature draws closer, he and his daughter will come face to face with the brutal answer.”

A dark horror short story with a surprise twist. The fantastic dramatic build-up is in huge part to the awesome art and color, shading detail, balanced with great pacing. There is much to the story for its mere 14 pages of comic art, 4 pages of straight text; with elements of religion, myth and metaphors.

“Hunted, lost, Thy is an exobiologist, member of a scouting mission, who finds herself plunged into an unknown universe.
Fighting for survival – in the middle of a war about to explode and of which she, inadvertently, was the fuse – Thy finds some extravagant allies, aliens with mysterious abilities and needs, with whom she will try to find a way to return to her galaxy of origin.”

Evo-Z is hard science fiction full of variety and interesting sci-fi concepts and designs. The vehicles are based upon the original concepts from Germàn Impache, a master modeler with work displayed at machemodels.com. The story has much going on, not allowing for a quick read. This is a good thing, with much to take in for its fantastic world-building and character depth present.

“The Voice holds Daniel hostage! Bandette and her Urchins scour the city in an effort to locate their abducted friend, while Daniel looks for a way to escape his captivity, and Inspector Belgique sets his sights on apprehending The Voice himself! All the while, Monsieur and Margot narrow in on the elusive prize at the root of the whole affair: the House Of The Green Mask!”

Love the heck out of this series since the first issue. At this point in the 12th issue, our spunky protagonist is well established as a unique lead unlike any other in all the comic book lands. The classic French style setting and expanding cast of characters are further well-developed and paced well for expanded interest. While this issue is not exactly the best jumping on point, this is worthwhile mentioning to anyone looking for something newish and different with high emphasis on fun.

That’s all for now. If you checked out any of the titles presented and have thoughts to share, or have suggestions of your own (cheap or free, accessible online or app)..let us know in the comments!