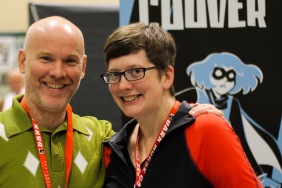 The greatest thief in the world.

That’s Bandette from Bandette, a fan-favorite comic series originally published by Monkeybrain Studios in digital format, and later printed in collected hardcover book format by Dark Horse Publishing. Bandette is the creative work of writer Paul Tobin, and artist (also married to) Colleen Coover. Since her début in 2012, Bandette has stolen the hearts of many with rave reviews, and multiple Eisner Award nominations (winning for Best Digital Comic in 2013).

During the last San Diego Comic Con, I chatted with Colleen Coover. We talked much about Bandette, as she revealed some fantastic insight on our delightful artful dodger…

From your own perspective..tell us about the character Bandette, her world and motivations.

Coover: Bandette is the greatest thief in the world. from writer Paul Tobin who is my husband, I am the artist. She lives in a France that never has been, never will be, a France of our creation. It’s our American ideal, basically.

I can’t say she robs from the rich and steals from the poor. She messes with the rich and powerful and evil, then sometimes through her own capriciousness, sometimes ends up helping other people. She is basically good at cards. She loves fun and adventure and that’s her whole thing.

As the artist working with Paul Tobin..would you share a little insight on bringing Bandette to life through these pages, especially with those fantastic colors and her look?

Coover: Well, we knew we wanted a teen girl. And, she is influenced by a character from actual French serial novels called Fantômette. I never read any Fantômette, but it’s a French sort of Nancy Drew super heroine in a series of illustrated novels. She wears a yellow tunic with a red cape and a little black beanie hat with a long tassle. So I was influenced by that, and Bandette’s look is similar. It’s red and yellow and there are other basic differences. But, I went with red because I am a big believer that red is the most eye-catching color in a comic book.

I agree (which initially drew me to the book).

Coover: Yeah, right?! Right after yellow. I use a lot of yellow. I use a lot of red. I use a little bit of green, a little bit of blue sometime in the background..not much. But, if there is a character who needs to catch the eye, that character is in red. There is a reason why all the iconic superheroes are primary colors. It’s because they’re the colors that really catch your eye. Secondary colors don’t reject your eye, but they sort of fade into the background..your purples, greens, oranges.

Yeah, I think that’s one of the cornerstones of Marvel’s success.

Now that Bandette: Volume 2 is out. Could you share a little bit about changes in Bandette and her world, since Volume 1, from your perspective..

Coover: Things get a tiny bit darker in Volume 2. Stakes are a little bit higher. There is an evil character called Il Tredici that we introduce. He is a strangler. He will stranger the hell out of a guy. We wanted to up the stakes to maintain the fun, and have the story with a little bit more richness of emotion, so it’s not just this sprite running around this ParisSmarish or whatever..

There are stakes as we are continuing on that line in Volume 3, where things are a little bit dangerous. Part of adventure is just facing nature, and that’s what Bandette is all about. There are little more elements of danger, a little more serious, and emotions to Bandette because things could go wrong. But you know, she is still just having a really good time!

So after that and forward in future issues, will the setting for Bandette be always be in France?

Coover: I don’t think we will change it very much. It’s very much a false Europe. Europe is the home of Bandette because in her head, it’s a European comic. We are totally Americans and we don’t speak any foreign languages. We do this as people have traveled very little, but we have an appreciation for the European style of comics that we are trying to channel. We are not not trying to homage or imitate, but channel through our American skills.

Are there any European comics you personally enjoy or draw inspiration from?

Coover: I grew up reading Asterix, Tintin. There are others I have forgotten. There is a duo, …..Kerascoet?!* It’s French. They did a comic called Miss Don’t Touch Me. That really formed my style for a little while. Especially, when I was first creating the style of Bandette.”

Are there any other projects for Bandette that may extend beyond the comics?

Coover: Not to my knowledge (laughs).

I would love an action figure!

Are there any other projects on your own or with Paul Tobin coming up?

I am solely working on Bandette as far as storytelling is concerned..otherwise the occasional alternative cover for the new Archie, with Mark Waid and Fiona Staples. I did a variant cover for Plants vs Zombies**, and there might be come more in the future. These are jobs I can take and get back to the comic. 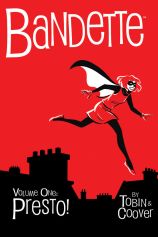 Bandette Volume 1: Presto and Volume 2: Stealers Keepers are both out right now on the shelves of better retail bookstores and comic stores everywhere, from Dark Horse Publishing. Current versions are hardcover bound, with many surprises extras including the “Urchin Stories” shorts set in Bandette’s world by various artists. For new single issues, check out Monkey Brain Studios for apps and downloads.