2020 was a great year, for video games releases!

A lot of great games were released for this year. Many of them, I wish I got around to or had the consoles including Ghosts of Tsushima, Microsoft Flight Simulator, Doom: Eternal, Ori and the Will of the Wisps, and more. We deserved fresh entertainment for this ongoing global pandemic crisis with the quarantines and social distancing shadowing much of 2020. Meanwhile, the interactive industry thrived with consistent sales, new consoles selling out, and plenty of new content for every player of all types.

Many of these fresh screen games set out to be enjoyed alone and/or socially online. We have more advanced gaming technology and means for online downloading, connecting, streaming, social discussing, cheering, and complaining. They all provide great distractions from the current time stresses as we may build upon new and renewed friendships with our shared love of gaming. Or, just pass the time and our best modern remedy for boredom with some single player escapism!

But for me, I’m a little bit of both types. I enjoy gaming alone, and with friends. Such depends on my mood and state of mind. Though, I steered more toward budgeting with big sales in games and freebies. There was plenty out there for those with the thinnest of wallets. I meanwhile, stayed mostly on my PC and Xbox One, no new consoles for me yet. I do want a Nintendo Switch, with time to play the many past games I missed for it.

Anyway, here are the games I personally present as the most important game awards to for 2020!

This is the BEST game of 2020, for many reasons that go back decades in what I ask for in a a best-tier video game. Make it challenging, story-deep, visually awesome, sensible controls, gratifying, constant surprises, great music, unique style, and heart. Hades has all of this and more, with aspects reminiscent of other personal favorites – Disgaea, Diablo, Dark Souls, Smash TV. But with Hades, the more you die, the more the game is revealed with more story and gameplay elements. There is so much more I would like to say, but just go play it if you’re into something that feels both old-school but also super modern in its approach and complexity.

A surprise that was released in 2018, but earned a huge boost in popularity thanks to its fans, developers, its very affordable price, online streams, and all around fun this game holds; all perfect for this time of mass quarantines and social distancing. Among Us is that connects us, as each game has its own story creating tension on just who Among Us is sus.

HELL YES!!!! I freakin love the old Streets of Rage games for the Sega Genesis (and later mods, fan-made remakes). Streets of Rage 4 is THE damn great, official successor to all of that, including all that made the game great – action, complexity and variance to the button mashing, awesome musical tracks that your fists can dance to. The graphics are perfect with expressive visual style, vibrant colors, detailed backgrounds, and hella fun for co-op action too.

It’s not really a game, but it should be someday. It’s hard to explain. Just watch the trailer, and from there, explore the crazy insane possibilities and let your imagination figure out the direction. The more you tinker and discover new aspects of the game, the more more awesome your wierd little world. I love the animation, sound effects, every little detail no matter how small; making Townscaper worth checking out.

This particular Japanese anime style visual novel sets itself off apart with a very unique story, and choosy situations that center around mechanics that are very science fictiony, flirty. with deadly sub-games that take a bit more thinking than I would expect. I much enjoyed this all as I watched and chimed in for some very entertaining Twitch streams from a gamer friend that you should follow (twitch.tv/aechonex).

A fun puzzle-adventure with dating and cooking themes game? Helltaker is that and so much more. It’s very unique, with catchy beats, and a whole lot of fun. It’s also free!

BEST FINALLY GOT AROUND TO IT GAME OF 2020

Developed and published by Square Enix
System: All the current consoles and PC

Final Fantasy XV came out a little over 4 years ago and has been in constant development all the way until 2019 with tis final DLC. This open-world game is freakin massive, giving its players much homework into other media for a wider complete experience. I found the 19.99 price for the Royal Edition (main game plus mostly all the DLC) the best I can get for my single-player RPG Final Fantasy loving needs. I enjoyed this far more than expected, delve deep into worldbuilding, and will forever treasure what it brought in this tough pandemic time.

THE LIFE AND SUFFERING OF SIR BRANTE

Developer by Sever published by 101XP
System: PC for the demo

A surprise treat among I discovered among the PAX Online demos. It’s a visual novel that reads like a lifetime biography, but with choices that do indeed tell a story of about the life and suffering of (you can choose his name). It’s a series of very unfortunate events, where you do your best to make the best out of it, and find deeper meanings though it all. It’s different and worth checking out for visual novel fans, and something to watch out for when it’s fully released.

The game I was most excited for its delayed release. And, I still am. But after seeing (and laughing) the glitches, problems, frustrations that seem to be a trend for these big, crazy games where play-testing continues with the player after its release…not playing or judging this until the final product is done with enough updates, patches, DLC, whatever it takes to experience as intended. Maybe it will be awesome as its hype. I will remain excited, and wait till the finished product.

That’s all the game awards for 2020 I got. If there was something else I should have played, please share in the comments below!

Formerly known as PAX Prime, the original Penny Arcade Expo in Seattle held its own for another year for the video gaming and tabletop gaming communities. For the digital forefront, definite trends showed well in the big rooms; with a rise in live-streaming channels, virtual reality (VR) tech, open-world games, and e-sports competitions. Final Fantasy XV, the new Warcraft expansion, ARK: Survival Evolved, Earthfall, Hob stood out as the most heavily promoted. Among fans, games held their own presence with little developer support with ever-present cosplay and fan cheer; such includes but not limited to are Overwatch, League of Legends, Pokémon Go, Street Fighter, past Final Fantasy games, and anything Nintendo franchise-based.

The physical tabletop realms were not as loud but just as colorful with their own trends in party-based card games. Cards Against Humanity, Exploding Kittens, Pathfinder, Dungeons & Dragons, Magic the Gathering had rooms and whole areas. Many newcomers fresh off their Kickstarters were easily accessible, but not as visible in the basement ACT Theater and Floor 6 areas. Everywhere, willing players can spend time meeting new friends while discovering new games to play. Merchants selling games and gaming paraphernalia were also present.

Below, are my choice moments of the 2016 PAX west show, captured in time with a little blurb on each:

The best booth of the show is definitely the one promoting ARK: Survival Evolved, where attendees may go up a staircase and mount a large dinosaur.

The Nintendo handheld booth moved for this year, now in the indoors area..

A couple of cosplay promoters at the Puzzles and Dragons booth.

The Bandai-Namco booth greeted fans with a cool group of Tekken cosplayers. 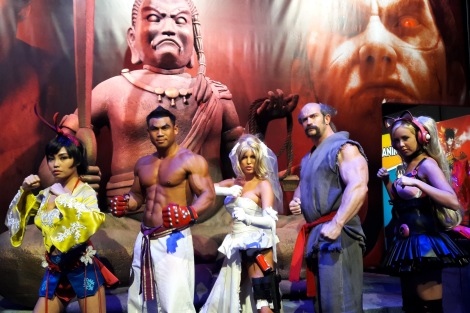 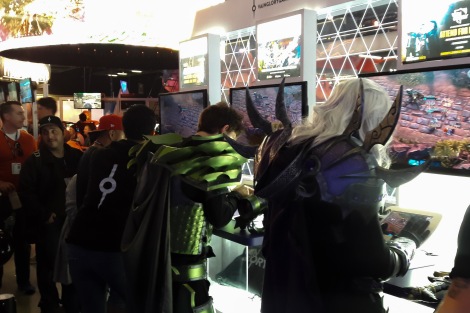 Dungeon League, by Surprise Attack, got much attention at their booth. I like the pretty colors..

Mekazoo, a fantastic looking side-scroller still in development but playable here. I look forward to its eventual release.

A giant skull with screens on its shades. Love it!

The upcoming South Park: Fractured but Whole game, presented here with the Nosulous Rift device, which is capable of emitting fart smells into the nostrils of its players. Yup, technology has come a long way!

Not sure from this cosplayer hails from, but her presentation is awesome.

A pathway many PAX attendees will easily miss, hidden almost behind the main escalator. For the moment, there is a quiet almost calming ambiance.

The small room where the Cards with Humanity game and game exclusives are sold, along with some interesting new games (of which I should have written down, but I remember a game called Secret Hitler stood out) 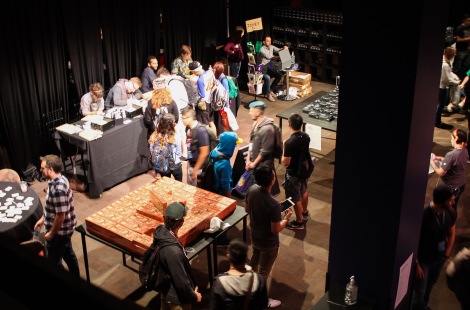 A trio of cosplayers on break..

The Nintendo Lounge area, now with a section I think houses the Pokémon crowd…

A tense game of Jenga with giant blocks

A Warhammer miniatures game set-up on the Skybridge…

An amazing construct of the USS Missouri made of Lego bricks, to promote the World of Warships game…

A trip of cosplayers emulating the cast of Metal Gear Solid 3: Snake Eater. 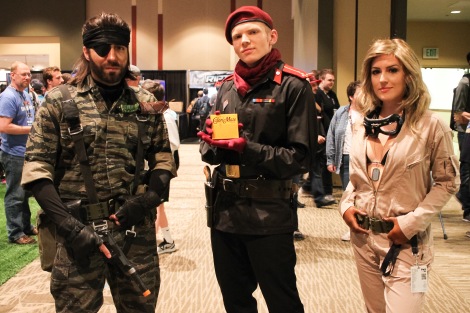 The famous Paramount Theater, used by the Wizards of the Coast company to host their Magic the Gathering card game tournaments and gameplays…

A closer look at that stage…

A new game for the Playstation 4, Drawn to Death, where the player fights to survive a demented notebook of sinister sketches. This, was my favorite banner of the show.

Not sure what game this was promoting, but bravo to the awesome puppetry design and craft work.

“Cindy” with her truck promoting the Final Fantasy XV game.

And at the end of my PAX trip, a cheerful gang of Toads!

Well, that’s all for this year, as I look forward to the next.