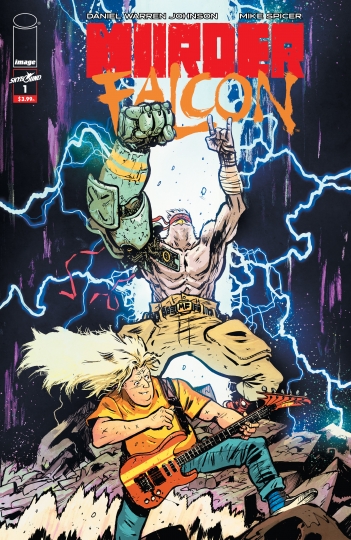 The world is under attack. Monsters have invaded our streets and our homes, and there’s only one thing that can stop them: METAL.

To better show the audience what they are in for, here is a little trailer preview:

“Music is something that brings me a lot of joy, and it was my goal to translate that into images, thus bringing MURDER FALCON into the world,” said Johnson. “It’s a super combo of all the things I love, and I’m so excited to share it with you all.” Jake’s life is falling apart: no band, no girl, no future…until he meets Murder Falcon, a legendary monster-killer sent from The Heavy to destroy all evil. But he can’t do it alone—he needs Jake by his side, shredding up a storm. Now, with every chord Jake plays on his guitar, the power of metal fuels Murder Falcon into all-out kung fu fury on those that seek to conquer Earth.

Captain’s Note: I fucking loved the hell out of Daniel Warren Johnson’s Extremity. With much excitement, I shall check this out.