Ah, the show exclusives, the finest badges of geeky nonsense for the spendy collector connoisseur.

For the great annual San Diego Comic Con, these are among my favorite things on the Exhibit Floor. These special items, for which attendees can buy direct at various booths, sometimes from an artist or creator involved. Since the early 2000s, these sought attention-getters remain a central goal of consumer gratification at the show, and online usually at greater prices to the private re-seller market. The traditional hunt grows a little more each year, with more weird and unusual aspects thrown in. If you can afford and have room for such things, than resistance is futile.

I took a good look at many though the various press releases and some new sites, then handpicked some favorites. Take a look:

The die-cast helicopter, featuring the evil Thanos at the controls, comes packaged in its own Cosmic Cube. Modeled after the hilarious 1979 opening pages of Super Spidey Stories #39 comics story.

Booth: Mattel, Price: $15
Thoughts: I love everything about this, especially the packaging. It’s also a reminder that many within the toy industry has a sense of humor, and big fans of comics obscurity,

No Toys 4 Us by Mr Blank Toys 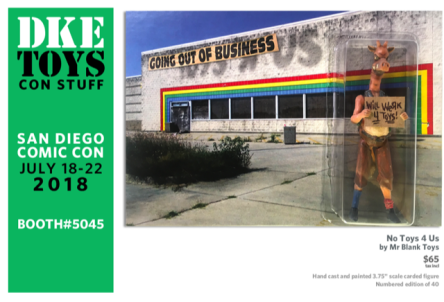 We’ve all be grieving the loss of Toys R Us, but no one as much as poor, sad, out of work Geoffrey the Giraffe. Mr Blank Toys in his SDCC debut brings No Toys 4 Us. Hand cast and painted 3.75” scale carded figure. Numbered edition of 40 pieces.

Booth: DKE Toys
Price: $65
Thoughts: Yes, that’s a sculpt of the head of Watto from Star Wars: Episode 1. The paint job is awesome. DKE Toys has many other wonderfully weird artist-created pieces as good as this one (with another on this list down further). Definitely worth a look!

An exclusive figure based on the Youtube viral video.

One of two limited edition patches base don artwork from the officially licensed Star Trek The Next Generation Cats book. 11″x17″ giclée print on by artist Justin Harder. He has other prints exclusive prints for the show

Booth: CLAUS Studio (Table #O-08 in Small Press)
Price: $30
Thoughts: Seems like the perfect work of art to frame and center in the living room. 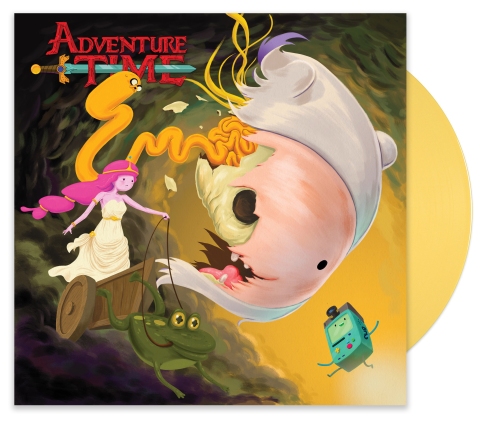 Adventure Time 7″ Vinyl, which will feature tracks “Friends Don’t Fight” (both with vocals and instrumental) and “Manlorette Party.” The vinyl cover art work is custom created by artist JJ Harrison. Supply is limited, so make sure to get them before they’re gone!

Booth: Mondo
Price: $12 plus tax
Thoughts: I love the art, but have never watched a full episode of the show. With that in mind, how many Adventure Time vinyl fans are out there? It’s cool, though.

The King of the Throne has come! Removable Magnetic poop king plush with a toilet that makes a flushing sound with a press of a button. Includes the 2 variant of the poopie zombies

Shared exclusive from Funko. The only true to the show part aside is that it debuts here with a special SDCC sticker. But still, really something because it stinks..literally. It emits an oder, just like the original action figure of the 80s MOTU line..

Booth: DKE Funko
Price: $10-12 (not sure, that’s a guess based on the last time I went to a Funko booth to buy Pops).
Thoughts: Wow, big ups to Funko to what I think is the only smell-bad figure of its kind. 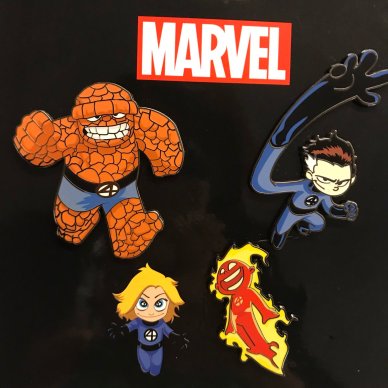 Metal backed pins of Marvel Comics characters with artwork by Skottie Young, 4 packs (different themes, but I like the above Fantastic Four one the best). To see the rest, click here.

Booth: Marvel
Price: $15 plus tax for blind packs of 2, $25 for themed sets of 4.
Thoughts: I love Skottie Young’s art, and The Fantastic Four set is a must have for me.

Very limited custom figure that’s definitely not licenses, and part of the other weird and wonderful artworks at the DKE booth. Only 20 produced! 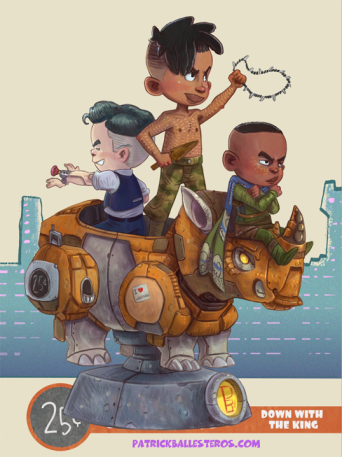 Booth: Patrick Ballesteros
Price: $10 each of $30 for the set of 4
Thoughts: That’s the best, most adorable work ever for my favorite big of this year. The Killmonger one is my favorite.

Transformers aint nothing to fuck with, for these 4.5 Inch special edition figures,  Megatron, Soundwave, Bumblee, and Optimus Prime.

Booth: Bait
Price: $30 Each, or $100 for the set
Thoughts: Why?!!! But love the paint jobs on these, but would have made more sense to have all Autobots or all Decepticons. 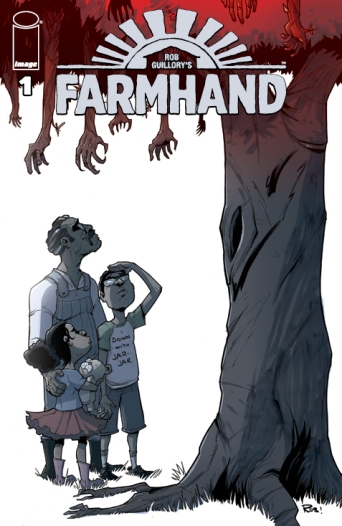 Variant cover comic book by Rob Guillory to the awesome new series by the artist of Chew.

Booth: Image Comics
Price: $10 +tax
Thoughts: Just finished the finished the first issue, and got a feeling the fist issue is going to be much more highly appreciated with the series progression. I love this spooky cover, and will be picking this up. 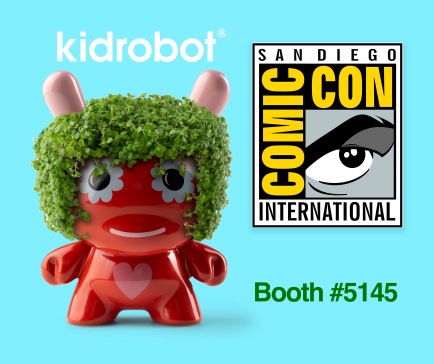 “This one-of-a-kind SDCC exclusive Dunny collectible let’s you and grow some foliage into your urban jungle. Renowned artist Jeremyville’s take on the Chia Dunny features flower eyes straight from the 60s, a colorful, warm glaze and a message of positivity: Grow Love Daily. Like any Chia pet, it’s up to you to care for this collectible and help him grow his ‘do. Cha-cha-cha- CHIA!”

Booth: Kidrobot
Price: $40
Thoughts: Finally, a vinyl figurine made for my kitchen window! 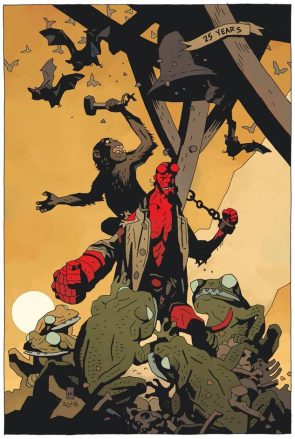 Booth: Mike Mignola SDCC 4901
Price: Unknown right now, but probably reasonable
Thoughts: That’s some of the best work I have seen from the legendary artist. Everything about it…colors, shading, composition, details is perfect. I want it!

Well, that’s all for now. There are many more SDCC exclusives out there, which I probably overlooked. If hunting these down at the show, by safe and plan ahead!