“The fourth arc of Gert’s fantasy feats ends as Dark Cloudia’s reign of terror begins—and with it, an air of impermanence and uncertainty looms over Fairyland.”

But here we are, as all great stories must eventually end. I Hate Fairyland will be a missed presence on the Image shelf, showing a diverse, darkly comic side rich with satire, comedy on the low and high ends of the brow spectrum, with explosions of vibrant color and unhinged art detail with a story to match. All, brilliant told through the writing and art of Skottie Young.

That being said, the finale does what it needs to do. Wrap up the story, to a point where resolutions emerge. Dark Cloudia is on her apocalyptic rampage, and the good people of need not the hero of the story, but the anti-heroine, Gert, risen from the hell to whoop her ass.

And that conflict resolves in a satisfying epic fashion, though I expected a bit more of some brilliant twist or strange turn. But, no…not really.

What we got instead, was an interesting development on our main character. A somewhat caring, champion of the people and a hint of a moral code. Gert fights, and does her thing. But in the end, she still wants to go home. There is a still a selfishness within, as she tires from this world and wants a normal life to herself. Perhaps she is growing up after all, because responsibility and feeling affection for others does that. It’s the full journey for her character, after the tradition of many lost little girls stuck in lands of make-believe.

But here attitude and rebellious streak carries on, as one of her best traits. 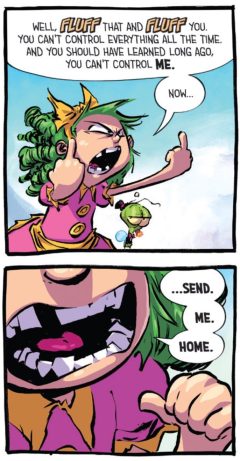 And she dares challenges those who made the rules, angry at a sudden loophole in the grand design of things. And she is sent back, and here comes another moment that really touched me. A friendship, to her little companion friend, keeping company and being there. It was sad, feeling the two must split. But, she gives a heartfelt respect to her one great friend in Fairyland. Some feels develop:

And, that leads to an end, reminiscent of so many tales of a lost little girl coming back to the real world. Gert wakes up to her boring life and finding a parallel similarity. It seemed for a moment in her subconscious, she wanted to go back. Then accepted her new fate with some departing words….Fuck Fairyland.

And, I think it suits the insatiable nature of Gert for any age. It’s Gert’s own unhappiness through life, no matter what happens. It’s not the happy ending others would want, but it’s her own to control and that’s enough.

Thanks to Skottie Young and Image Comics for this great and fun little adventure.