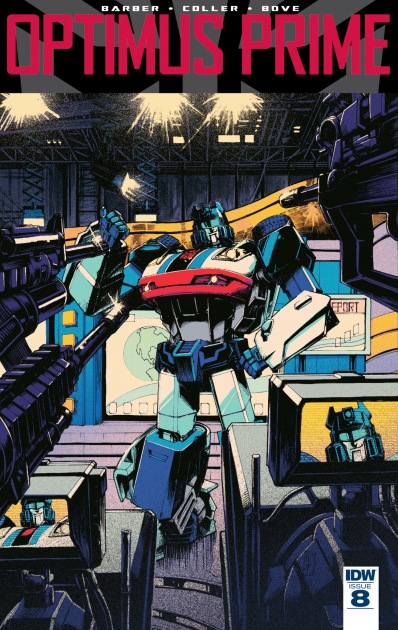 “Jazz confronts his past—and the Autobot’s future—in front of millions of television viewers. But will he make the people of Earth understand Optimus Prime’s mission… or turn against it?”

As an old school Transformers fan, I have a nostalgic gravitation towards the classical representations. Such robots then appeared more human, with a believable feel to their strange existence; at least by appearance and weird Earth acquired lingo. The later incarnations either appeared less serious, too digital looking, or just ugly in a world full of explosions and over-melodramatics.

Still, my favorite Transformers of the first generation is Jazz; the good Autobot jive-talking streetwise robot capable of transforming into a Porsche. I saw this cover of my old childhood friend with his classical look and dived in. I have not read earlier issues or this new Optimus Prime series, or the acclaimed recent Transformers series of the recent years.

So here in this story, contains several separate but connected ongoing dramas relating to recent events within the IDW Transformers universe. Jazz is foremost, who is granted a television interview arranged with humans. Then we have a flashback to the days of Cybertron past, where Optimus Prime (Orion Pax back then) and Jetfire (an eventual turncoat in the bitter war between Autobots and Decepticons). Then some sequences to the current days with other Transformers exchanging thoughts and emotions.

Such is an interesting issue, not relying on action or trash talking; something I have come to associate the franchise with. The issue is mostly focused on the more humanlike aspects of the Transformers, with their philosophies on various social topics and personal relationships. Much of that comes back to the Jazz side story, where he talks about his musical upbringing and his appreciation for Earth music. He brings the story to a more recent incident, where he apparently killed a police officer while defending a young African-American youth. His difficulties in dealing with the American media frustrate him, and the complete story here is lost (at least to this reader just jumping in).

Such is too bad, as wanted more on Jazz’s perspective of Earth culture and social problems, being adjusted well to the urban culture (transforming into a Porsche helps). Still, I would love to have an entire series of just Jazz, delving more into the human experience as a refugee alien robot war veteran.

Meanwhile, the other stories had an interesting aspect to them, further than I would expect robots based on toys originally marketed to children. There is so much with these panels I found interesting, as far as the contrast in the past and present history of warring robots from a faraway planet go. Still, there are details I find amusing, like this bar seen. 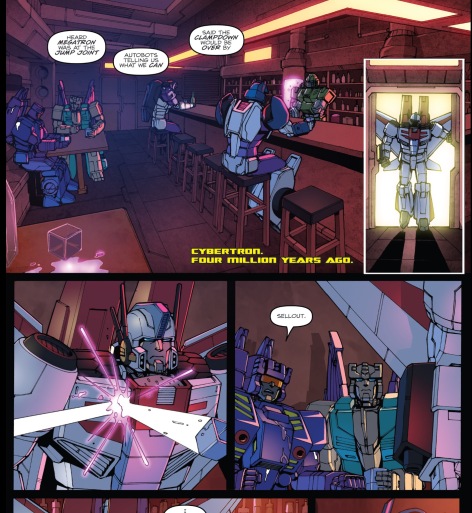 I love how all the wings, engines, boosters, and other machine parts of them are just everyday attire. There is a fascination to the weirdness, especially going back to the classic look, appearing somewhat natural in everyday living. Also interesting, are the social positions statuses being scientists and police officers lost in Cybertronian history, indicating more of its “normal” non-war times. Then, we fast forward to a future, where the humans whose difficult interactions with Jazz, may bring about the negative kind of change in his Earthen views.

I am a little curious in reading more of this series, especially if this good writing and solid art style carry on. The coloring is fantastic as well, mixing the vibrancy well of the colorful robots with the cold, metal Cybertron world, and green, organic planet Earth. My only complaint is the lack of the Autobot leader Optimus Prime in this particular issue, who barely has any impact or presence in the overall issue.

Overall, a great issue with a good jumping-on point for those classic Transformers fans, or those wanting more drama in their fighting robot interactions. I may look into the recent trade paperbacks, though I am not sure of which. I welcome any suggestions.