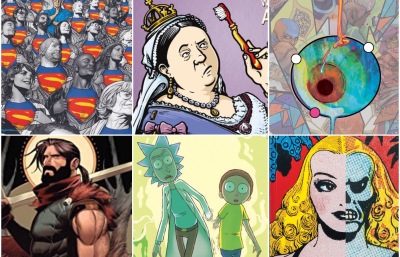 Tis the holiday season, to give something new for the sequential art lover you know…

Below, are my hardcover comic book volume and graphic novel suggestions. Why such things for gifts? Because, the hardcover format gives a lasting quality, and adds a bit of deserving specialness to it. The sequential art form within can hold deeper, longer lasting appreciation to those holding a hardbound shell, when prominent on their home bookshelf or coffee table.

So, these picks below are hand-picked favorites by us, having read and enjoyed each one. Each pick is likely available through local comic and retail bookstores. Ordering online is good too, but part of the fun for the holidays is also visiting local shops while humming Christmas tunes. So, print or write these out, and don’t forget the wrapping paper!

“Screenwriter and Eisner Award nominee Max Landis (Chronicle, American Ultra, ADVENTURES OF SUPERMAN) presents the seven-issue miniseries that chronicles Clark Kent’s development into the archetypal hero he will eventually become. With the tone of each issue ranging from heartwarming and simple, to frighteningly gritty and violent, to sexy, sun-kissed and funny, SUPERMAN: AMERICAN ALIEN is unlike anything you’ve seen before. This new hardcover includes special bonus features.”

Get this for: Superman fans of any age, short story readers, those who like a little art variety, fun-loving campy readers, fans of the Flash TV show (also Smallville.)

“Working closely with Moebius Production in France, Dark Horse puts the work of a master storyteller back in print—with some material in English for the first time! Stel and Atan are intFrom JONATHAN LUNA (THE SWORD, GIRLS, Spider-Woman: Origin) and SARAH VAUGHN (Sparkshooter, Ruined) comes ALEX + ADA, a sci-fi drama set in the near future. The last thing in the world Alex wanted was an X5, the latest in realistic androids, but after Ada is dropped into his life, he discovers she is more than just a robot and takes a huge risk to unlock Ada so she can think for herself and explore life as a sentient android. Can they survive the consequences? This oversized hardcover collects issues #1-15”

MOEBIUS LIBRARY: THE WORLD OF EDENA

“Working closely with Moebius Production in France, Dark Horse puts the work of a master storyteller back in print—with some material in English for the first time! Stel and Atan are interstellar repairmen trying to find a lost space station and its crew. What they discover about the universe and themselves on the mythical paradise planet Edena, though, changes their lives forever. Moebius’s long-out-of-print World of Edena story arc gets a deluxe hardcover treatment, with its five main chapters—Upon a Star, Gardens of Edena, The Goddess, Stel, and Sra—collected here!”

“The hit comic book series based on Dan Harmon and Justin Roiland’s hilarious [adult swim] animated show RICK & MORTY is now available in its first deluxe hardcover collection! Join the excitement as depraved genius Rick Sanchez embarks on insane adventures with his awkward grandson Morty across the universe and across time. Caught in the crossfire are his teenage granddaughter Summer, his veterinary surgeon daughter Beth, and his hapless son-in-law Jerry. This collection features the first ten issues of the comic book series, including ““The Wubba Lubba Dub Dub of Wall Street,” “Mort-Balls!,” “Ball Fondlers Special,” and more, along with hilarious mini-comics showcasing the whole family. This special hardcover edition also includes an exclusive sound clip of Rick and Morty and all the cover art from the first ten issues of the comic book series!”

Get this for: Ric and Morty fans, of course. Also, those who like to laugh and not take a lot of things too seriously. 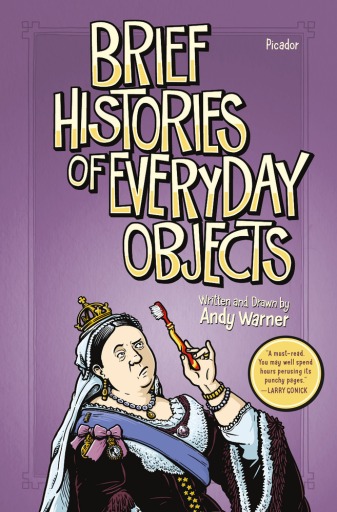 “Brief Histories of Everyday Objects is a graphic tour through the unusual creation of some of the mundane items that surround us in our daily lives. Chapters are peppered with ballpoint pen riots, cowboy wars, and really bad Victorian practical jokes. Structured around the different locations in our home and daily life—the kitchen, the bathroom, the office, and the grocery store—award-nominated illustrator Andy Warner traces the often surprising and sometimes complex histories behind the items we often take for granted. Readers learn how Velcro was created after a Swiss engineer took his dog for a walk; how a naval engineer invented the Slinky; a German housewife, the coffee filter; and a radical feminist and anti-capitalist, the game Monopoly. This is both a book of histories and a book about histories. It explores how lies become legends, trade routes spring up, and empires rise and fall—all from the perspective of your toothbrush or toilet.”

Get this for: History and obscure trivia lovers. Those who engage in silly small talk. Those who need a new coffee table book. Anyone who likes to laugh and learn.

“Who is Santa Claus? Meet the man before he became a myth.He’s a myth. He’s a legend. He’s loved worldwide by children and adults alike . . . but does anyone truly know the origins of Santa Claus? Set in a dark fantastic past of myth and magic, Klaus tells the origin story of Santa Claus. It’s the tale of one man and his wolf against a totalitarian state and the ancient evil that sustains it. Award-winning author Grant Morrison (All-Star Superman, The Multiversity) and artist Dan Mora (Hexed) revamp, reinvent, and re-imagine a classic superhero for the 21st century, drawing on Santa’s roots in Viking lore and Siberian shamanism, and taking in the creepier side of Christmas with characters like the sinister Krampus. Klaus finally answers the burning question: what does Santa Claus do on the other 364 days a year?.”

Get this for: Grant Morrison fans, Santa Claus, Krampus fans, dark humor lovers, those who enjoy a mix of clever writing but not take it too seriously.

TURN LOOSE OUR DEATH RAYS AND KILL THEM ALL!: THE COMPLETE WORKS OF FLETCHER HANKS 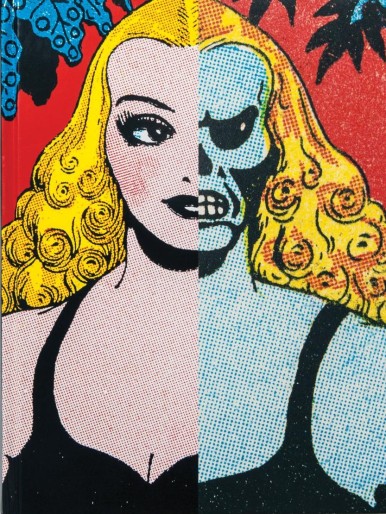 “Fletcher Hanks was the first great comic book auteur: he wrote, penciled, inked, and lettered all of his own stories. He completed approximately 50 stories between 1939-1941, all unified by a unique artistic vision. Whether it’s the superhero Stardust doling out ice cold slabs of poetic justice, or the jungle protectress Fantomah tearing evildoers from limb to ragged limb, contemporary readers are stunned by the pop surrealism and outright violent mayhem of Hanks’ work. Originally featured in two paperback volumes, this deluxe hardcover collects―for the first time―all of Hanks’ previously published material, plus several gems newly discovered for this volume, making this the very first complete collection of the works of Fletcher Hanks. Full-color illustrations throughout.”

THE UNBEATABLE SQUIRREL GIRL BEATS UP THE MARVEL UNIVERSE

“Proof that we’re living in the best of all possible worlds: THERE’S GONNA BE A SQUIRREL GIRL GRAPHIC NOVEL! It’s a stand-alone adventure that’s both great for new Squirrel Girl readers, and also for people who ALREADY know about how she can talk to squirrels and also punch really well! Behold: a story so HUGE it demanded a graphic novel! A story so NUTS that it incorporates BOTH senses of that word (insanity AND the weird hard fruit thingies) (they’re fruits, did you know that?) (I didn’t until I looked them up just now, so looks like we’re all learning science from this solicit text for a comic book!) Squirrel Girl has defeated Thanos, Galactus, and Doctor Doom. TWICE. But in this all-new graphic novel, she’ll encounter her most dangerous, most powerful, most unbeatable enemy yet: HERSELF. Specifically, an evil duplicate made possible through mad science (both computer and regular) as well as some Bad Decisions. In other words, SQUIRREL GIRL BEATS UP THE MARVEL UNIVERSE! YES. I CAN’T WAIT, AND I’M THE GUY WRITING IT..”

“ODY-C, modeled after Homer’s Odyssey, is a psychedelic, gender-broke science-fiction epic that tells the story of three legendary warrior-queens, Odyssia, Ene and Gamem, returning home after a centuries-long battle. Told in verse with a visual sensibility that redefines the very possibilities of the comics medium, this gloriously oversized hardcover also has exclusive bonus materials including essays by classicist Dani Colman, teaching aids, and a massive 10-page fold-out previously only available in the sold-out first issue.”

That’s all for now. If you have any added suggestions or notes to add, please share in the comments below!