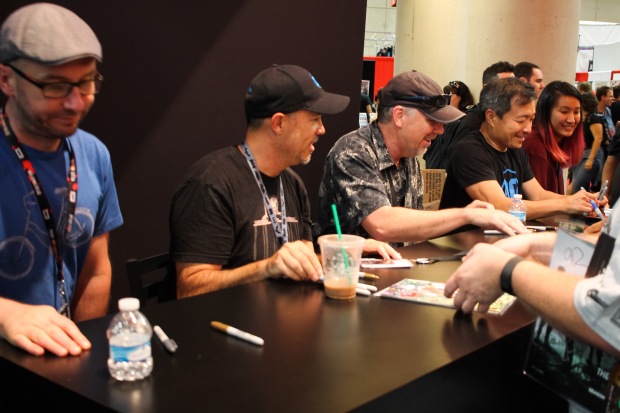 Here are some of my favorite people of this year’s Comic Con!

What really makes a good Comic Con worth the while in attending? It’s the people who you can meet there. Among you, are creative types on the visual and literary arts.  Some are well-known, while others are striving to succeed. Others arrive to learn, while others are there to teach. Within the 200,000 people attending, is a good chunk looking to get inspired, or there to perhaps inspire, or maybe even both. So below, I captured moments with my favorite people of this year of the Comic Con..

In the Small Press area, here’s Jim Hillin. artist/writer on Zombie Bunnies – a fun little indie comic I really enjoyed. His pitch was a nice reminder of the best ways to enjoy the comic cons, through discovery and being susceptible to suggestions! 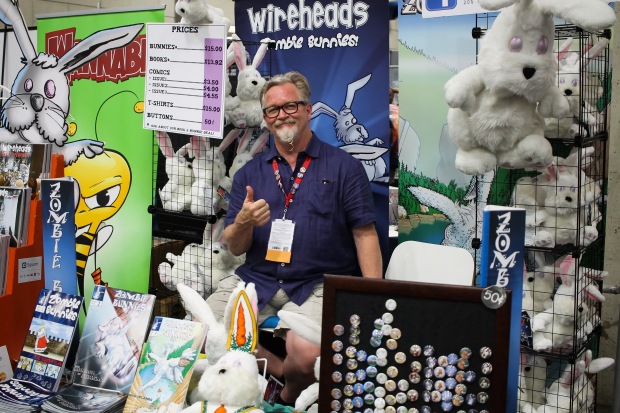 Jim Davis, creator of Garfield! This was the best highlight for me for this year, hearing him talk and discuss the iconic cartoon cat and friends in his own panel. 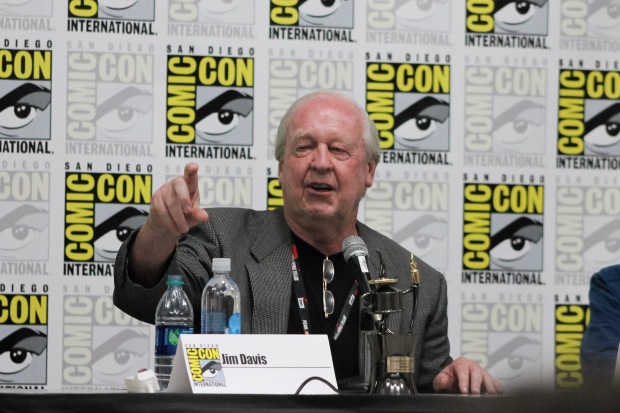 Ray Dillon, artist on The Legend of Wonder Woman, sketching the Amazon Princess at the DC Booth. 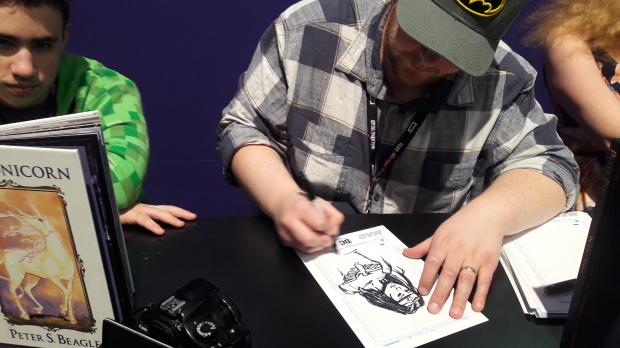 Ron Lim, a favorite comic artist from my past years as a Silver Surfer fan. It was a joy to meet him and watch him in his natural habitat.

Jeremy A Bastian, artist and writer of Cursed Pirate Girl, a book recently reviewed here on SW as a personal recommendation to anyone into adventure and awesomely detailed art. To meet him in person was an awesome joy. 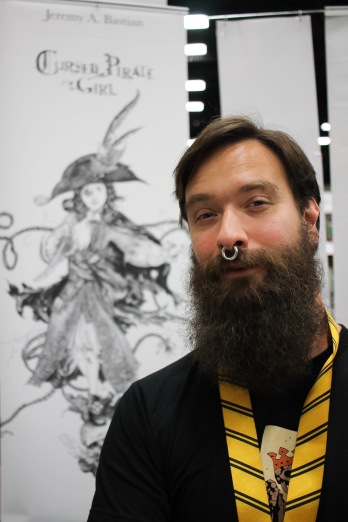 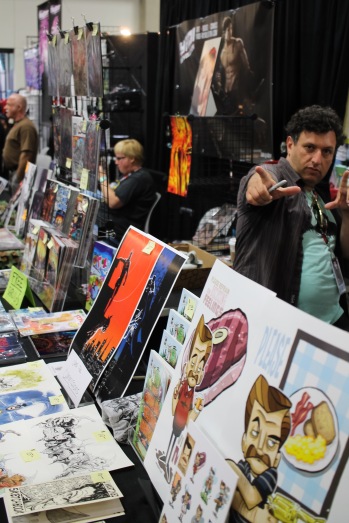 Sebastian Kadlecik, comic writer and artist on Penguins vs. Possums; an awesome indie series nearing its completion on a full eight-issue run. I met him a while ago at the Long Beach Comic Con, and was cool to see him again at this bigger convention.

Ivan Brandon, famed writer of the currently acclaimed series Drifter and many other books over the years. We had a fantastic conversation on writing and Drifter, which I shall put up soon on the SW site. 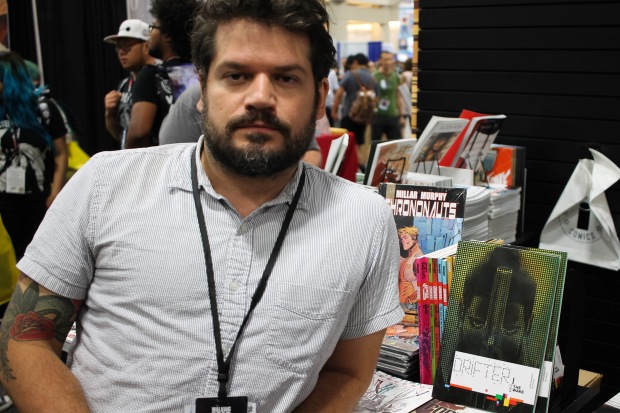 One of the several cosplayed promoters with artist Joe Phillips (around the corner but also in costume, see Part 2!), promoting a Midsummer’s Knight comic series,  new series with a different take on Shakespeare classic work.

Speaking of artist Joe Phillips, here he is in full Jedi costume (on the right).

Roberto Aguirre-Sacasa, writer on Afterlife with Archie and Chilling Adventures of Sabrina, and many other titles (mostly Marvel Comics). We had a nice chat about his work on Archie Comics and his love of writing.

Coming writing legend, Howard Chaykin (Black Kiss, American Flagg, Satellite Sam and much, much more over four+ decades) hanging out by Artist Alley. We had an awesome chat about writing, social commentary in comics, and his next project. That interview will be up soon, here at SW! 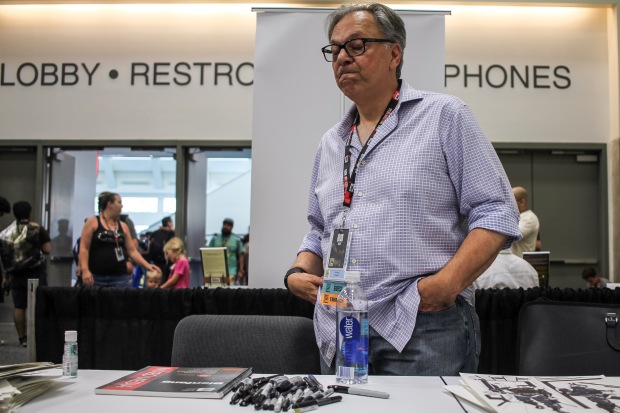 No idea who these people were at the Nickelodeon booth. I asked some phone snappers in the crowd on how (of which there were many), and they didn’t seem to know either. Still, do as the Romans do, or something…

A trio of cosplayers promoting Jekyll Island Chronicles, a new comic from IDW.

Jim Lee (to the right), is a joy to see him interacting with fans at the DC booth. Other writers and artists were also present,

I think this was a promotion team for the new Star shows Ash Vs. Evil Dead; and a fantastic example of how a company can make Comic-Con fun by pushing a the cosplay element among the fandom to boost interest with an established franchise. 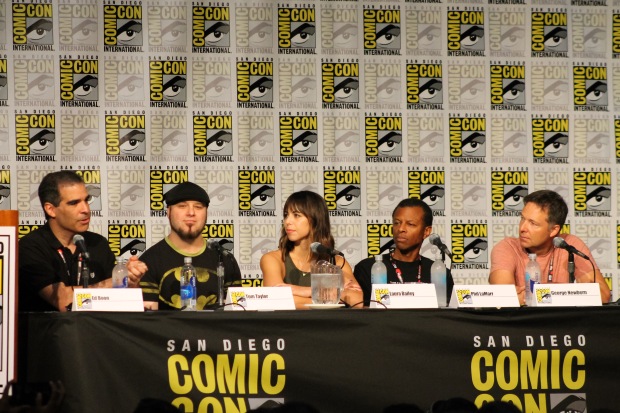 Brian Haberlin, creator comic artist/writer on Faster Than Light, Anomoly, and more. We had a great chat on science fiction in comics, and the use of UAR apps in his books. An interview with will be featured soon here on SW.

Joëlle Jones, a comic artist whose recent work on an issue of Superman: American Alien has made me an instant fan. Currently, she writes and draws Lady Killer, a new series through Image Comics, out now. 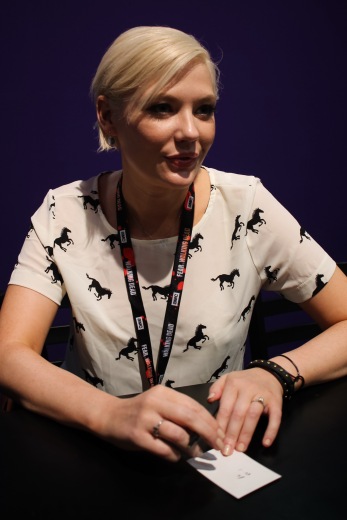 Here she is again, drawing Clark Kent on a small art card. 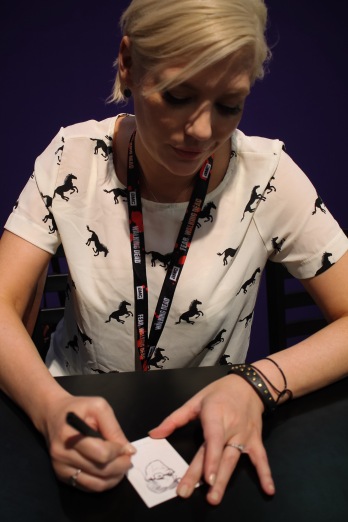 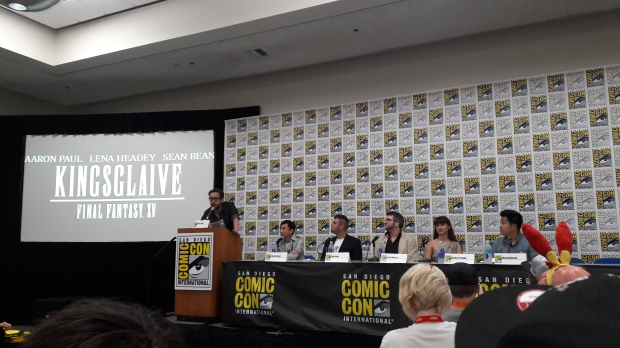 And among the many wonderful people, are the cosplayers like the folk in this Doctor Who gathering. Many of the awesome costumed persons shall be featured in Part 4 of my 2016 Comic Con commentary. Look for it soon on SW!

That’s all for Part 3. Come back soon to the SW for Part 4: featuring the creative cosplayers of Comic Con!