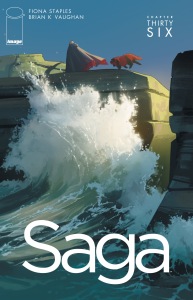 There is much to love and laugh about this particular issue. Some of it, for Ms. Noreen’s attempts to smuggle Hazel out in a box. There is serious heightened tension here, where the old what-could-go-wrong-trope repeats in hilarious fashion and the awesome results. Much of that comes from Ms. Noreen’s wide-eyed facial expressions and her awesome kick. It was a terrible plan, but all worked out.

Meanwhile, Ghüs encounters the Will in an epic action-packed moment well-remembered in this overall saga of Saga. We learn much about Ghüs in the sudden confrontation continued from the cliffhanger of #35. First, don’t call him “tiny.” Second, don’t fuck with his steed. Third and most important, don’t fuck with Ghüs. Those who read this issue, know what exactly, I’m talking about. For the rest, the moment is best appreciated in reading the sequence, and appreciating in full what happens next.

On a side not, Upsher and Dof are growing on me much as a sort of Rosencrantz and Guildenstern of the Sagaverse. I love how truly stuck they feel in this strange predicament, while the main story carries on without them. I can’t recall other journalist types in all of science fiction, though one could think important as the soldier, smuggler, royalty, parent classifications in the overall space opera. Yet, here I ponder why as the crazy happenings of their surroundings is simply too much to categorize and keep order of. Their necessity comes in question and feels more comical, which shows a bit of sadness because they have their own hopes and personal lives to feel for as well.

In the midst of all that, we get a very emotional reunion for Hazel (and long-awaited when considering the time frame). Such the moment is truly deserving of a full-page thereafter and a surprising end later on, also best enjoyed for those with this issue in hand.

Overall another great issue, now with more emotions! Though, this is an important turning point for Hazel being reunited, we have other developments and balanced attention toward the growing supporting cast. The Will especially, who know has two invisible friends (The Stalk and his sister, The Brand). which raises some interesting concerns for his mental state and drug problems. There are so many directions a writer can go with this, but I am happy it’s all best left in the hands of the original writer and artist. Or now, if they kill him off.