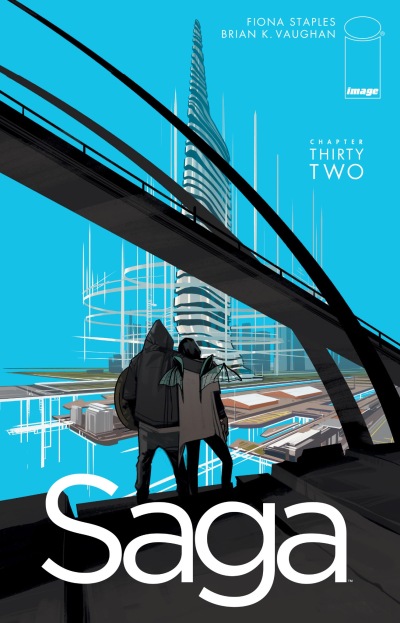 “Marko and Alana learn something..”

The saga of Saga continues, but not as usual..

A new chapter also starts for our proud intergalactic parents of Hazel. This time, the relationship between the two goes back to their troublemaking outlawed troublemaking roots. All seems right for the two, looking for a little completion to their life, leading back to their daughter again. It’s a circle that needs a complete, I feel.

Meanwhile, the almost circle seems quite enlarged as time passes. I look back how much time since the last time we saw Alano and Marko together, about half a year. Our time seems a bit further extended when Vaughan and Staples take a break. Yet, we have a time skip for so much longer as our key players have grown, developed as characters and changes in their appearance. For this well-paced stretch of time being so developed,  I think Saga has been a good part of my life for the few years it’s been out.

I love Alana’s new look. There is something about her glasses and heightened badassery. The scarf, cloth give a real wild western feel, to which adds to this dangerous adventure. There is a feeling of renewed youthfulness with Marko as well, no sporting a beard which I think should stay. I can’t but help a little uneasiness, that this is all going too well. Nothing in the Sagaverse goes too well.

Who do you think they mean by him? Hmm.

Also, good to see Prince Robot return, though no longer a prince. I got this odd feeling his story will come to some abrupt end, though unsure why. Also Ghus is back, as I feel is a sort of bridging transnational character, someone to bridge the gap between yesterday and today, as it has not appeared grown or changed. Then, we got the son of Robot, now as Squire. He holds a proud kill, perhaps suggesting passage into young adulthood. What could all this mean? I suppose we must wait, but hopefully not too long.

The artwork as usual is splendid and consistent, as usual. I find the design of the fire elemental guards as fantastic and awesome, not sure why; I would definitely consider having little action figures of them if Saga had or would have such a product line. Otherwise, nothing too eye-opening except for perhaps the straight forward nudity..at this point shouldn’t bother anyone. I can’t help but laugh though, should someone find this comic lying around in a stack of Spider-Mans or something of that. But such genitalia presented is a pleasant reminder of how unrestrained the storytelling is, through the artist choice of visuals.

Overall, this issue is a great breather for this reader as a stage setter for things for changes afoot, with some great touches of humor and action. I look forward to more of the same bringing more of the different..