This soulless husk of a game is quite possibly the worst game of 2015.

The Animal Gods have fallen. Once sacred, they are now husks—haunted beasts lost to toxic fumes from a great bronze industry. Play as Thistle, a small & agile warrior hellbent on destroying the curse that plagues these creatures. Wield a 17th century BC Bronze Sword… and set the Gods free..

Personal Recommendation:
(Based on Steam Version on Windows. 2.8 unfortunate hours of gameplay via Steam review code)

This was the most agonizing three hours of gameplay in recent memory.

Not every game is born equal, and as such my expectations of any one game are generally quite open and reasonable. But when your opening line and description on Kickstarter is that:

“Animal Gods is a stylized top-down action / adventure game set in Bronze Age Europe, 15th century BC. The game pairs the tight and polished action of The Legend of Zelda: A Link between Worlds  with a cast of characters and touching story moments that might remind you of classic 90’s JRPGS“

I am almost offended! This game is neither action/adventure or RPG in the slightest, and those are some pretty big shoes to fill.

A more accurate description of Animal Gods is that it is a Little Red Riding Hood simulator where you wander through a ghost town, using your incredibly underwhelming (and situational) powers for the sole purpose of reading a teenage girl’s diary entries. As ridiculous as this sounds, I hope you never actually play to find out that I am 100% right.

In quantifiable gaming terms, Animal Gods is more like a platformer/puzzle type game than anything else. As the main character Thistle, you must navigate three different dungeons using the themed power of that dungeon to liberate the trapped god inside, conveniently finding bits of scattered lore throughout the in-game world.

While the game does have its moments of fun, one of the main flaws of Animal Gods is that it doesn’t give its audience any reason to feel emotionally attached.

Give me a reason to feel! 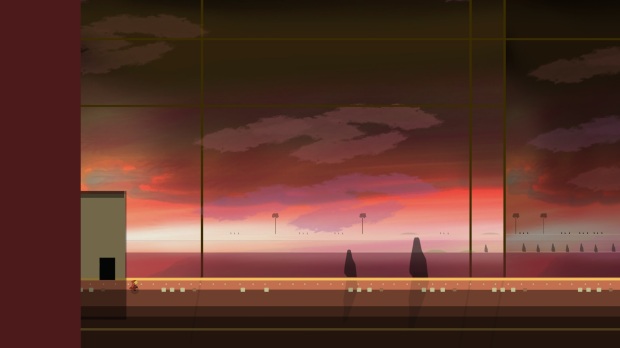 The cast of memorable characters and touching moments talked about in the Kickstarter description are rather curious, because they don’t exist. It is a stretch to claim that there is a cast of characters when the three other characters are only mentioned in the diary entries, never once appearing in the game (save one dead one if you want to get technical). Interacting with the gods is also a shallow experience, lasting at the most 30 seconds with no real questions answered.

I would imagine that the main purpose of Animal Gods is for Thistle to restore the gods and find out the tragic backstory of this civilization–but who exactly are we doing this for? There is not a single living person in the game aside from Thistle, and we know nothing about her. Where is she from, and why does she care about any of this? There are no answers to any of these questions.

Also, there is no conflict. Whoever caused this abomination to happen is nowhere to be found. Restoring these ‘haunted beasts’ to their former god status is as easy as completing a few puzzles (the boss fights literally ARE puzzles instead of fights), and nobody is trying to stop you. An argument can be made for the one solitary cube enemy type that serve to provide some sort of resistance as they MUST be killed to progress, but they have such little personality that they may as well not be there. Instead of tension which is good in an action game, there is only annoyance.

In short, someone flipped on all the lights in an abandoned house, and it is your job to simply flip them off.

Not very compelling, is it.

An exploration in frustrating game mechanics 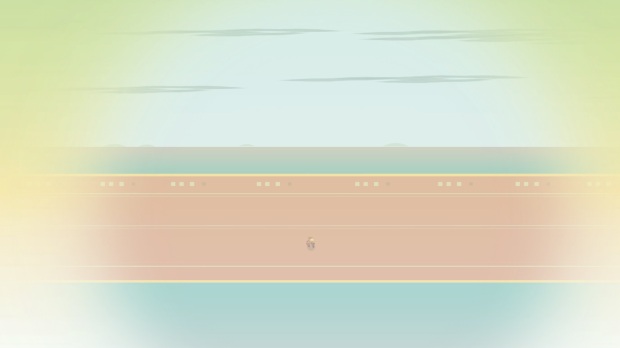 Although connecting emotionally with this game was impossible, I was at least hoping it would be fun to play.

Unfortunately, I knew right away once I had control of my character that this was going to be a bad experience. Due to Thistle’s crippling walking speed, the ‘over the top’ camera view and size of my character in comparison to the relative environment was a curious choice that quickly wore out its welcome. If you think her ‘agile’ movement is laughable now, wait until you see the leg cramps she gets when stairs are present.

In the above picture, it took my character nearly 15 seconds to walk from one end of that gigantic uninspired stage backdrop to the other. There are multiple instances of this happening, with the most frustrating walk lasting 30 mind-numbing seconds until I reached my deserved reward, which was, you guessed it, reading yet another poorly written diary entry–which brings me to my next point.

The second clue I had that this game would be substandard was when I didn’t have control over the text speed within the dialogue box. It was far too slow. If you pair that with the slow walking speed, and the fact that most of the exploration in Animal Gods leads the player to find more of these diary entries…it truly feels like the game is holding you hostage.

These seem like nitpicky details to judge a game from right off the bat, but these simple quality of life considerations should be absolute no-brainers when putting a game together. If these pedestrian details were overlooked, you can only imagine the lack of polish on some of the more important mechanics.

One such mechanic was adequately defining map boundaries. As pictured above, the left side of the picture gives an example of an edge your character would die upon crossing, but the right side of the picture shows a similar edge you had to cross to continue progress of that map.

If you’re going to introduce a game mechanic, it has to remain consistent through the entire game (unless directly addressed with a logical reason as to why it changed). Otherwise it looks like a sloppy oversight, and can be especially frustrating for a puzzle type game.

However, the most frustrating mechanic of all, by far, is the fact that your character is ability gated throughout the game for no reason at all. Thistle has the ability to dash, use a sword, and shoot an arrow, but she is only able to do so in specified areas of the game. This only serves to cripple an already limiting game even further. If the dash ability was unlocked for the entire game, I am sure I could have finished the game in under 2 hours instead of the 3 that it took.

To be completely fair, some of the puzzle sections in Animal Gods were enjoyable. Thistle’s movement is much more fluid during the puzzle sequences, and the dashing mechanic was fun to some extent even if it was at times a bit unwieldy. Despite these positives, there are simply too many things holding this game back for them to make a difference.

The information on Kickstarter regarding Animal Gods is a little misleading.

Currently, the Steam client says that Animal Gods was released October 12, 2015, and has a price of $9.99, yet the Kickstarter campaign says the game is slated for a fourth quarter 2016 release.

However, if you look at their campaign updates (and scroll down a little), in May they announced the game coming out ahead of schedule. While this is well and good, the screenshots in their campaign almost look like they are from a completely different game. The graphics are updated, a world map exists, there are more enemies, weapons have new abilities, and damage points are now displayed whenever a weapon connects with a monster.

I understand that games often look different and have different features added/removed during development, but the final product of Animal Gods looks like a stripped down car resting on cinder blocks. What gives?

There is absolutely zero reason for a paid version of Animal Gods to exist as a final product in the Steam store when it is very clearly unfinished. If the developers ran out of money or encountered issues, they should have delayed release of the game, priced it accordingly, or at least offered some sort of goodwill on the Steam page that they would continue adding features to the game post-release. At the end of the day, people are still spending their hard earned dollars on this game.

It pains me to say that this picture of a triangle is more like any Zelda game than Animal Gods will ever be.

The fact that the game is so wildly different than advertised leads me to objectively say that I do not recommend this game, even if went on sale.

Animal Gods may look like an action/adventure game, but blow in its general direction and that cardboard illusion falls flat on its back. It is a shame considering the game is visually intriguing at times, but it is merely a husk of what it aspired to be–if it aspired at all.