“An astronomer kills his family, then himself, leaving a cryptic warning. A Veiled Lady hunts her victims through human nightmares…” 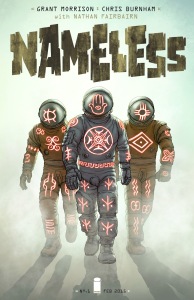 “An astronomer kills his family, then himself, leaving a cryptic warning. A Veiled Lady hunts her victims through human nightmares. An occult hustler known only as ‘Nameless’ is recruited by a consortium of billionaire futurists for a desperate mission. And the malevolent asteroid Xibalba spins closer on a collision course with Earth. But nothing is what it seems-a terrifying inhuman experiment is about to begin. Abandon all hope and experience ultimate horror in NAMELESS.”

I very much intrigued by this. Not so much the usual complex storytelling I expect by Grant Morrison, but the style and sequential art pushed to its modern inventive form by this combination of Morrison and Burnham. This combination gave a unique storytelling vibe and feel to their earlier work in the second volume of Batman Incorporated. The exaggerated expressions, often mixed with a mix of human emotion and horror had me on edge at times (especially in #5 with post apocalyptic Gotham vision). The mix does that all to the extreme in Nameless. 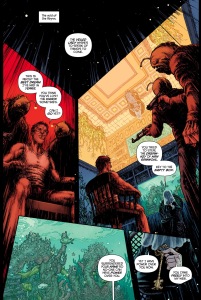 There is violence, and nightmarish imagery, all brought to a strange order. The panel layouts are either brilliantly inventive, or traditional with their sequence of events being inventive; or both. There is also some awesome colorwork happening, with nightly tones and rain effects add to the bleak depiction of a dark world, and changing lights of the dream world draws out the surreal. There are some great concepts in fantasy tech as well, like the aircraft projecting communications via giant face on a sphere-thing. The creepy frogs with glowing eyes send much chills through my reading eyes.

And that being said, the visuals and storytelling deliver a nice bit of action to the nightmarish visions. There is no safety in dreams, and there is more to them. We got sinister fish men, a scary woman, some glyphs, a familicide (I made that word up), and other puzzles. There is a story centering around a man who steals a key, only to wake up to a world on the brink of destruction by an oncoming asteroid. He must meet with others and do more  I have a feeling and faith in the writer, Grant Morrison; whose writing genius makes the reader think..sometimes can be a bit pretentious.

I can’t wait to see where this goes, as the first issue is merely a set-up. Many questions are brought forth to what the nature of some occultist forces at work, hopefully with eventual answers. So far, our protagonist seems like a kind of badass Indiana Jones meets Ash Williams (Evil Dead) kind of character. The world-building is dark, with a little bit of satire to mix with all that unexplained murder.  I have a feeling his character will develop further as the story unravels, something Grant Morrison often does with his stories. In that, bring some sanity to this strange bizarre world Chris Burnham brings us in his unique art style of storytelling.

The story just begins, with an ominous last page. Where all this goes, is curious.