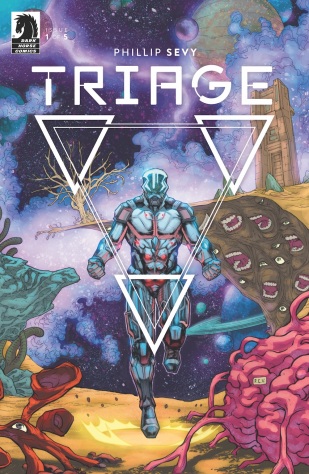 Triage, a bold new sci-fi post-apocalyptic mini-series written and illustrated by veteran creator Phillip Sevy (The Freeze, The House, Tomb Raider) is set for coming comic book stands, this summer from Dark Horse publishing. Triage is the idea of its creator, on of how we measure up when standing beside heroes and legends.

The story. as revealed in a recent post from Darkhorse.com..

Evie Pierce – a dedicated nurse – awakens to an unfamiliar world alongside two strangers—one, a young and snarky superhero; the other, a hardened rebel military commander of a post-apocalyptic world. When a mysterious figure begins to hunt them down, the three women must work together to survive, discover why they were assembled, and how their survival is the key to saving all existence.

Phillip Sevy adds, “For my first creator-owned book, I wanted to try and the deliver the biggest, boldest, and craziest story I could through the lens of one singular vision. In Triage, I wanted to go as big and as personal as possible. From writing to penciling to inking to coloring (with amazing letters by Frank Cvetkovic), I’ve been killing myself to deliver a story that is exciting, fun, audacious, and human. Evie has become one of my favorite characters I’ve got to work with. At its core, Triage is about discovering your identity amidst the chaos and enormities of the world around you.”

Triage #1 (of five) will arrive in comic stores and popular digital comic platforms on September 4, 2019.