Robert Kirkman’s company, Skybound (publisher of the The Walking Dead and other comic titles, has revealed its line-up of exclusives for 2017 for year’s 2017 San Diego Comic-Con, on Wednesday, July 19th through Sunday, July 23rd.

These convention exclusives are directly available for purchase at the Image Comics booth #2729. Quantities are limited per day.

See below for all the basic info, prices, and available pics.

The convention exclusive has three costumes! Only 500 pieces will be at the con. $40 each.

The Walking Dead “All Out War” SDCC Variant Set

SAGA – The Will and Lying Cat action figure 2-pack 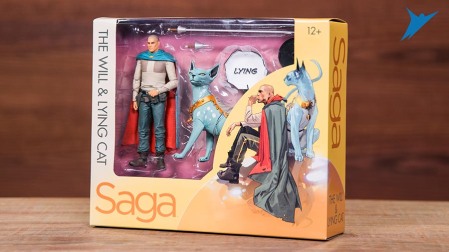 From the pages of the hit comic Saga, comes the latest action figure set from Skybound and McFarlane Toys, The Will and Lying Cat. $50 each

How do you top last year’s The Walking Dead Negan and Glenn two-packSan Diego Comic-Con exclusive? Skybound has done just that with The Shiva Force Four-Pack, which features 5″ figures of The Walking Dead‘s Rick Grimes, Michonne, King Ezekiel, and Shiva dressed in a unique Shiva design (and each figure in the set is also individually packaged on a vintage card back with new painted artwork by Jason Edmiston). The four-figure set, which was designed by McFarlane Toys, also includes weapons of choice for Rick, Michonne, and Ezekiel, and will retail for $100. There will be two gift-box variants: a regular color version and a bloody variant, which are limited to 1,000 copies each.

There will also be a fifth Shiva Force member: Jesus. He will only be available in the summer MegaBox from Skybound, which you can sign up for today. The Shiva Force characters will also be featured in Scopely’s The Walking Dead: Road to Survival starting Thursday, July 20 (and you can see a look at Ezekiel, who will be free for a limited time in the game, below).

Also recently announced, some other items Skybound will also be rolling at the San Diego Comic-Con, with prices ready…