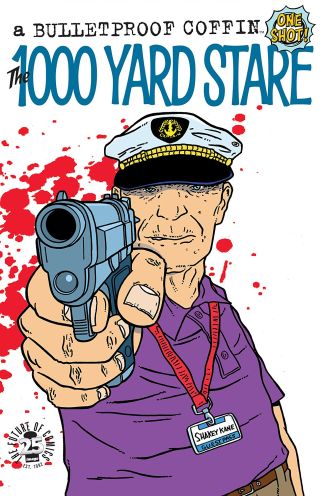 “The long-awaited sequel to THE BULLETPROOF COFFIN! When indie publisher Image Nation hires Shaky Kane to write and draw his own comic book, the artist finally finds himself free from the tedium of visualizing the geriatric ramblings of washed-up hack, David Hine. See the awful consequences as jealous rivalry leads to a bloody showdown on the convention floor.”

I never read Bulletproof Coffin before this. Perhaps, I should have.  Should I? I heard good things, and the original series remains on my list.

But, this particular issue grabbed my attention from the cool cover, with enough curiosity to peek inside. I like the art, and there appears to be some meta-commentary on the culture of modern comic conventions. So, I bought this, and here we are. Was the entire read worthwhile? Should I have picked up the original series? Will I after this?

So forth, we get into the story with Shaky Kane, a veteran artist alone at his booth at a comics con. His view and reflection are of the past and present of the modern comic convention, he seems somewhat stuck in making ends meet. There is a bit of biography behind the scenes of this life and moving forward while separating himself from the writer. Such is an interesting experiment given that the actual writer based upon is putting out this story, drawn by the artist of the same name.

Such is an interesting view, from the point of the artist, reflecting their love of the work.  Then we have the flip side, and the growing influence of Big Hollywood harvesting the culture. Changing it, and bringing in a new breed of fandom. For Shaky, there is now a surreal existence in living through this odd pocket world of cosplay and finicky attendees. 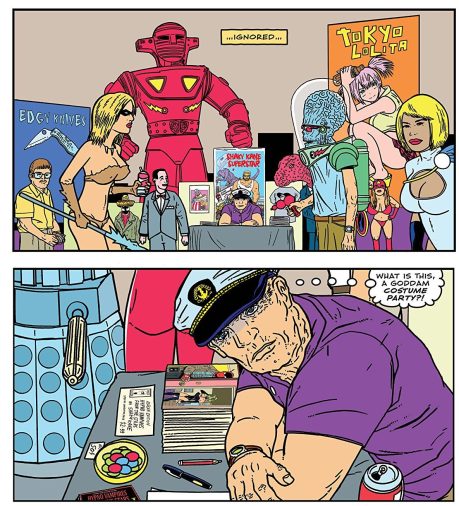 And so continues the story, where we break into an interrupting comic inside for his sequential artwork. Such is a joy to read, and an escape for both the reader and creator. Such is a shared and colorful experience, then back to the “real” world. And there, lies a sad tragedy, with dark-humored irony.

The art is awesome and vivid, with thin lines between the dramatic and cartoonish. The linings of the inks are well-defined in the expressions and posture. The perspectives of each panel are well-placed and give greatly to the developing story. Though the convention is huge, the Shaky’s small pocket world of the convention table is enough to grasp the scope and feel of the situation. I love how the story shifts to the bigger world, just sitting on his table waiting to be discovered, then back again.

Overall, a fantastic read which got me curious and excited to hunt down the original series, and volume 2.  While this one-shot issue may not thrill everyone, such is a real treat for me and those who understand the changing culture. I highly recommend it for con-lovers, artists, and fellow creatives sharing a sense of dark humor.